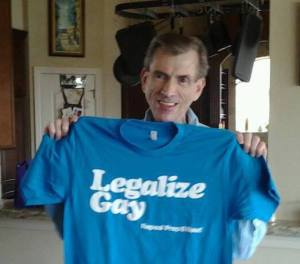 Mike Kelley, LGBT Activist and Historian, Programmer, Quilter, beloved brother, son and friend, died peacefully Friday morning, January 20th, at Odyssey Hospice in The Heights.  Mike was born October 11, 1951 in Lawrence, Massachusetts.  He studied theatre at Emerson College (Class of 1975) and studied dancing throughout his adolescence.  After college,  Mike worked in theatre, directing and acting in many plays.

After moving to Houston, Mike worked with the Main Street Theatre, directing children’s plays, then worked as a Programmer until he retired.  He embraced his retirement, using his time and talent to the benefit of the Harris County Democratic Party, Pride Houston, the Quilt Guild of Greater Houston (QGGH), the Houston Area Rainbow Collective History (ARCH), and The Botts Collection of LGBT History.  Many ill and terminally ill children and their parents found comfort in quilts created by Mike for the Guild’s charity quilt program, Comforters.  His quilts were also auctioned as fundraisers for Ovarian and Breast Cancer research.  Mike’s commemorative T-shirt quilts were displayed annually at the Pride Festival and World AIDS Day Houston. Mike also enjoyed many showings of his work at the GLBT Community Center.  Mike logged over 3000 volunteer hours at The Botts Collection, identifying, collecting, organizing, recording, and preserving materials that are of historical value to the LGBT community.  His contributions to the community are too many to list.

Mike was preceded in death by his husband, Bill Brunson.  Left to mourn his passing and celebrate his life are his many friends, coworkers from his varied volunteer endeavors, the members of The Cotton Pickin’ Bee and QGGH, and his adopted family.

In lieu of customary remembrances, memorial contributions in Mike’s honor may be sent to:

This entry was posted in RIP. Bookmark the permalink.

One response to “RIP – Mike Kelley”