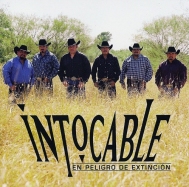 That was my initial reaction to the intro to the first track, Nos Falto Hablar. With its obvious rock influences throughout the track, its soaring vocals and harmonies, it became obvious that Intocable had come up with something special for their new CD, En Peligro de Extincion (Universal Music).

The rock intros continue in the cumbia, Como Se Fue Ella, with a bold, tough beat offered through serious drum and percussion beats, this track offers some excellent lyrics. The ranchera Decidimos (Bien o Mal) has a smoother intro,  which immediately turns into a “rola bien Intocable” with its own rock influences evident in its hard drumming and pasadas on the bajo sexto.

Culpable Fui (Culpable Soy) reminds one of a rock power ballad and has some amazing lyrics aptly delivered by Ricardo Muñoz. The music gets bolder on No Sera Tarde with another hard intro and some serious acordeonistics from Muñoz. A sonic intro later, the cumbia, Como Se Olvida, revs up the listener, only to end up with a country-esque intro for Dimelo with some awesome bajo sexto playing.

Te Amo (Para Siempre) has already been getting some serious radio (and YouTube) play. The tune was definitely a clue to what was to come as far as Intocable’s boldness in producing this latest CD.

Always a band willing to pump out a bolero, Intocable gives us Te Deseo Lo Mejor. The CD gets back to its rock influence with a Doors-esque drum intro to Cada Vez Que Estas Conmigo, another lyrically strong tune complimented by the music. Se Acabo Tu Fe is another Intocable cumbia that will keep folks dancing.

The show-closer, because this CD was quite the show, seems more like an anthemic ranchera than anything. Y Te Vas will have folks clapping and singing along at concerts, for sure.

OK. I’ll say it. This is the best Intocable production I’ve ever heard–and I’ve been a fan since their first Capitol Records CD, Fuego Eterno. This is a must-get for the collection!

Congrats to Intocable for keeping things fresh and for being giving their music ganas.