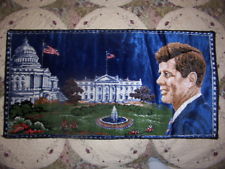 Obviously, I was born 8 years after President Kennedy’s assassination, but I’ve known about him ever since I was in the single digits. Much like many Chicano households in South Texas, we had some sort of photo or tapestry in our house, too. For us, it was a 4 ft. by 6 ft. velvet tapestry that took up half of our dining room wall. When I first asked my parents who that guy was, my mom explained to me Kennedy’s history–the young president who cared a lot for Mexicanos and was felled by a bullet because a one guy hated him that much. And then she told me about the family, about Bobby, and Teddy.  And, thus, my fascination with the Kennedys.

My mom still gets a little sad when she recalls the events of November 22. Not just because of the usual “what might have been,” but the sadness that politics and hatred caused a young girl and boy to lose their dad. That a young widow would now have to take care of her kids on her own under a very hot spotlight. And, even today, how a family would suffer through various tragedies. The story is a sad one, but for my parents, it was also one filled with hope–hope that was passed on to my sisters and me. And to this day, it’s still a hope worth fighting for.

The State Board of Education, in their infinite pendejismo, has decided to take out Algebra II as a graduation requirement.

Instead of requiring students who choose to enroll in one of five enrichment areas, or “endorsements,” to take the math course to graduate, the board amended the proposal to require only students who specialize in science and math to take the course.

The problem is that Algebra II is required to get into college. The bottom line is that students get tracked–placed into a virtual sub-class of students which top-tier and other universities will not even consider for admissions.

Treisman said the math course is critical for students to meet college and career readiness standards, be eligible for automatic admission to public universities under the state’s “top 10 percent” law, have sufficient mathematical knowledge to avoid remediation courses upon entering college and keep their career options open.

I wasn’t a fan of math until I took it in college with a professor who actually cared about students learning the stuff. (Go figure!) It shouldn’t only be required, more resources should go to helping kids become college-ready.  SBOE will vote again today, and then again in January. Given the 14-1 vote, there’s no doubt that if you want to change things, 2014 is when we can decide. Vote Wendy Davis. Vote Leticia Van de Putte. Vote Democratic!

This entry was posted in 2013 Categories, Thoughts on Viernes and tagged thoughts on viernes. Bookmark the permalink.