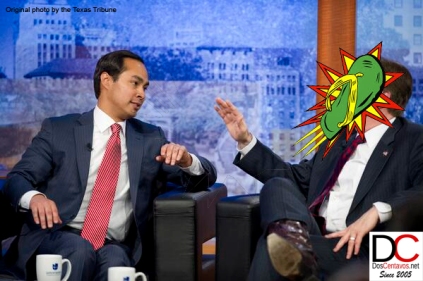 Castro Wins by A Chancla!

That NYT Article on The Castros

Jeff Horowitz mostly made the article about this.

Neither brother, both of whom graduated from Stanford and then Harvard Law, speaks fluent Spanish. And neither is learning it.

Much like the Castros, I grew up as a “pocho.” Thanks to parents who pushed me to learn it, I’m pretty comfortable speaking it, writing it, and translating documents to ensure some cultural relevance and not just some robotic Spanish that the media is dictating we should know. In other words, I consider myself kind of dangerous. But pochos like me are few and far between. In fact, folks in my generation (The Castros are 39 and I’m 42) generally aren’t the best Spanish speakers, although we are quite connected to the overall cultura, particularly Mexican American (Chicano) cultura. That Horowitz got a quote from a pollster who happens to be Peruvian (Bendixen) tells me he didn’t do much research in Texas on this particular cultural matter. In other words, Latinos aren’t all the same.

Is there a burgeoning immigrant population to which we must also communicate? Sure, but Anglo, African American, and other candidates must also learn to be culturally relevant to Mexican Americans and other Latinos. A one-size-fits-all approach will not work–and it hasn’t ever. And, by the way, wonky Spanish is just as boring as wonky English to folks who aren’t reporters, analysts, consultants, staffers, bloggers, etc. Of course, there’s that other matter that all Mexican American and Latino voters are, wait for it, Americans!

Anyway, when I heard about the article I didn’t want to read it, thinking it was just some hack trying to make something out of nothing. The gringo media needs to get serious about talking about Mexican American and other Latino candidates otherwise, they will keep giving us virtual toilet paper.

Latinos Are The Next Whites?

This was an article in Slate about something having to do with the color spectrum and Latinos. Something. I sorta joked that I attempted to become white by living in Kingwood for 10 years, but that it didn’t take.

I think, for the media to get what Mexican Americans go through, they just need to watch this. Or at least, talk to us!

This entry was posted in Thoughts on Viernes and tagged thoughts on viernes. Bookmark the permalink.