Full of hits from the 90s heyday of Tejano music, these remain on his nightly playlist. Hobbs hasn’t lost that golden voice and always has good musicians to back him up. 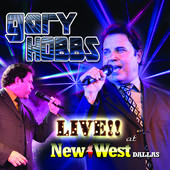 Thrown in from the 80s was one of my personal favorites, Diferentes.

Hobbs has remained a tried and true Tejano music ambassador, always staying true to the genre and taking it across the country. No doubt he’ll keep fighting to keep Tejano music alive and kicking.

This is definitely a collector’s item for loyal Gary Hobbs fans. Personally, I’ve been a fan since the early 80s. I’m willing to admit that at one time, I owned the 45 rpm of Contigo Aprendi when the band was called Brando Mireles and the Hot Sauce Band featuring Gary Hobbs. But that’s for another blog post.

Get yours today! It’s even on iTunes!