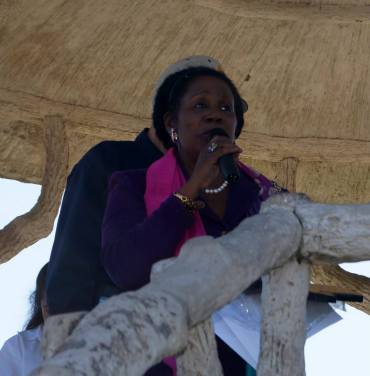 Leader and Activist Maria Jimenez honored for her years in La Causa.

CM Robert Gallegos mentioned that the Cesar Chavez Parade was among the first events he attended when he launched his campaign for District I.

Part of the crowd.

It was a well-attended event that must continue to grow. It was great to see Chavez High School students enriched by this celebration, as well as Pct. 6 Constable Martinez challenging the students to get involved as the struggle for civil rights is far from over.

Some kudos must also go to Sylvester Turner for showing up, which is more than I can say about the other announced candidates. As CM Robert Gallegos stated, a couple of years ago, this was the first event he attended and look at him now. One cannot expect votes if they don’t show up. And here’s a secret:  People who show up to these events celebrating activists actually vote–or are willing to listen.

Congrats to the TAHP and all involved for a great event.