Alief Bond: I Just Moved And Already I Have an Election Coming Up!

Posted on April 14, 2015 | Comments Off on Alief Bond: I Just Moved And Already I Have an Election Coming Up! 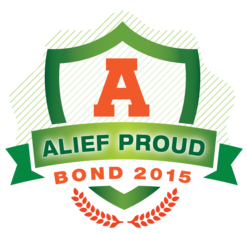 I’m an avid voter, so, as soon as I moved into my new place, I registered and found who was representing me. To my surprise, I found out I have a few more Democratic representatives, but I also found out I now reside in the Alief ISD (barely, as mine is on the northeastern corner of the ISD). I even have an election coming up in which I will be voting FOR the Alief bond.

There is all kinds of growth out my way and the Alief schools have been no different. Student achievement at AISD is high; they boast a 95% graduation rate; and the vast majority of students are graduating on a recommended plan. Alief hasn’t had a bond since 2003 which means they are way overdue for improvements and new facilities. Now is the best time to get this done.

The Alief bond is mostly about new facilities with 67% of the $341 million bond going to new construction, including classroom space for full-day Pre-K, a Career Center, Professional Learning and Performance space, and expansion of some current facilities.

30% of the bond is going to security enhancements across the district, as well as facility improvements, like new roofs and improved A/C units, new entrances to schools, a softball field at Elsik HS, handicap accessibility, a library expansion, etc. Finally, the rest of the bond is for school bus replacements, which means safer, better running buses.

All-in-all, this is a sound investment which will still keep Alief ISDs taxes among the lowest in the area. And, it’s for the kids.

Early voting is April 27 thru May 5, while Election Day is May 5. Find your voting location here.

This entry was posted in 2015, K-12 Education and tagged Alief ISD, Bond 2015, elections. Bookmark the permalink.