Garcia Makes It Official, Is Running for Mayor 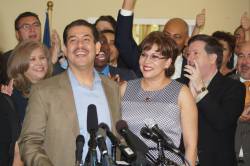 Longtime lawman and public servant Adrian Garcia finally answered the question on Wednesday:  Will he, or won’t he? He will run for Houston Mayor, Garcia announced before dozens of friends and family members at the Lindale Park Community Center located in the Northside where he resides.

Stating he’s the candidate who can balance a budget, save taxpayers millions, and protect Houston families, Garcia added, “We commit to enhancing a quality of life that benefits everyone, from the wealthiest to the humblest, but never ignoring one for the other.”

In a speech in which he credited much to his wife and family, he reminded folks of what he was taught when he was young.

“I have done what my parents taught me to do years ago, and that is to simply work hard and do a good job”

Talking with several of his supporters, the one word that all agreed this campaign would be is tough, but that with their hard work and determination Garcia can come out victorious in the end.

Frankly, I’m glad he’s in the race, despite any concerns about a new right-wing Sheriff I might have. Bottom line, he was forced to resign, while others in the running get to keep their elected positions. Garcia in the race could add some excitement, as well as some ánimo to the electorate for a real discussion on the issues. I think Kuff just said something similar. Great minds!

It’s no secret, I’ve been critical of Garcia in the past, but he’s also served the community well all these years. I’m no one-issue voter; if so, I’d show up and not vote for any of them, right? So, let’s keep an eye on this race. Enjoy!

Update:  Holy mole , my buddy David Ortez was also at the announcement.

Video of part of stump in Spanish.

This entry was posted in City of Houston, Elections and tagged Adrian Garcia, houston mayor. Bookmark the permalink.

One response to “Garcia Makes It Official, Is Running for Mayor”