Posted on July 20, 2015 | Comments Off on DosCentavos Feels the Bern 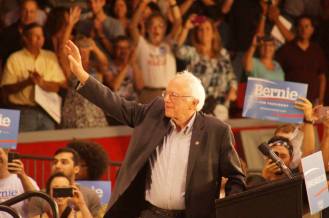 I joined over 5000 of my closest friends and attended the Bernie Sanders rally at UH Hofheinz on Sunday evening and I must say I was impressed in a lot of ways.

Sure, I was expecting a great, truly progressive speech from Senator Sanders–even after the weirdness of #NN15–but what I didn’t expect was such an amazing atmosphere. The diversity in the room was notable, if only because I had recently been reading some snark on Facebook by Hillarite friends of mine talking about how “white” Sanders’ events had been. The Houston event, though, blew those notions away. The bottom line:  A diverse cross-section of America seems to be listening to Bernie Sanders because he’s saying the right things on most issues, rather than just speaking in one-liners (evident in a one-hour speech).

Now, much like Hillary Clinton, Sanders has not provided expanded answers on immigration reform (usual standard stuff), but after Saturday, Sundays venture into racial justice issues hit all the right notes. While Clinton has offered her standard stuff on immigration reform, she also has a record of calling for immediate deportation of children and more deportation judges, so, the negative stuff being tossed about by her fans against Sanders on the issue really hasn’t affected what I think of Sanders. I’m hoping Sanders expands on the issue, as well as Latin American affairs in the future.

PDiddie expands on what Bernie said, so, no sense in rehashing the speech. I will provide a youtube of film I took when Sanders began his talk on racial justice and immigration, in case he is still receiving criticism. The good thing about the #NN15 stuff is that, hopefully, Dem candidates will begin to speak on the issue. Ultimately, this isn’t about race or identity politics, it’s about expanding the space that the issues have received in Democratic Party politics (more on that in the future) and actually doing something about these issues. If Dem activists cannot handle it, then we can’t win in 2016.

As far as the event, it was good to see fans of Hillary and other Dem activists in the crowd. I think we were all looking for a dose of energy because these are our issues Bernie was hitting on. Primaries are a good thing, nationally and locally, so, let’s enjoy the discussion.

This entry was posted in 2016, Elections and tagged #feelthebern, 2016, bernie sanders, president. Bookmark the permalink.