Bernie Sanders is a Regular Cesar Chavez on Immigration 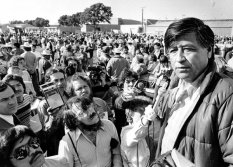 I haven’t been falling for the latest attacks on Bernie Sanders’ immigration stances–whether they come from the right or Hillary Clinton’s supporters. Much like Cesar Chavez did back in the day, Bernie has a problem with cheap, exploitable labor and its effects on the labor market, fair pay, and fair working conditions. So, when he called the concept of “open borders” a Koch-brothers idea, he wasn’t all that far off the mark.

What self-serving, profiteering, union-busting corporation wouldn’t want cheap labor and dismal working conditions to drive up profits? Yeah, that does sound like the Koch Brothers, or corporate farms.

I remember as a kid how corporations, like the vegetable cannery in my hometown, were bussing in undocumented laborers from 40 miles away as cheap, exploitable labor, pushing out Mexican Americans from these jobs–agri-jobs. It was a great scheme of divide and conquer and it worked.

Now, if you’re talking about “open borders” from the extent of fixing the legal immigration system to ensure the free-flow of workers who will be treated with respect and fairness, that’s different, and Bernie Sanders, much like Hillary Clinton, supports comprehensive immigration reform with a path to citizenship and a reformed “legal” immigration system that will ensure wages and working conditions are kept fair and even competitive. But you better explain yourself, rather than just throw the term around looking for a quote to exploit.

What many of these lib-labs are doing is asking the question rather openly, instead of getting into specifics. The term “open border” is already being used by right-wingers for the current state of immigration. What this does is bring the same answers from most Democrats:  “I support comprehensive immigration reform.”

I mean, how many of these so-called reporters or journalists have asked Hillary Clinton any tough questions about her support of immediate deportation with no due process for Central American children? How many of these lib-labs who want to suddenly talk immigration by exploiting a quote have asked anything about the immigration detention scheme that has exploded under a Democratic administration? How many want to talk Latin American relations, support of Central and South American coups, etc.?

What we need is a real discussion on Latin America. It is easily avoided because of the Middle East, Russia, and other parts “over there.” Meanwhile, political, business, drug, and military interests consort to treat people unfairly, or even kill people, in order to support or bring back right-wing extremist governments to Latin America–a scheme that is as American as, oh, I don’t know, a broken immigration system that exploits cheap labor.

So, let’s have a real discussion, rather than playing the usual finger-pointing “GOTCHA!” politics that has kept the issue of immigration a dead issue in America.

UPDATE:  Jorge Ramos at Fusion had a pretty good interview with Sanders.

This entry was posted in Uncategorized. Bookmark the permalink.