Posted on August 3, 2015 | Comments Off on Poll: 25% of Latinos Are Clueless, Self-Hating Trump Supporters? 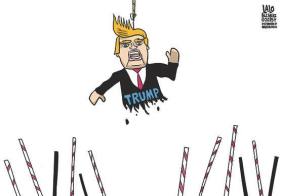 While the media is selling the latest poll of Latino thoughts on Donald Trump as “75% having a negative view.” I’m pretty concerned about a quarter of those polled being accepting of Trump’s message; not surprised, but concerned, as they could easily accept the usual GOP message on Latinos and immigrants. Given recent elections, they probably have accepted the GOP message.

Asked to assess that comment (about immigrants being rapists and drug dealers), 55 percent of Latinos said that the remarks were “insulting and racist and have no place in a campaign for president.”

A huge majority also found that Trump is hurting the GOP’s image. I would ask, “More than usual?” Let’s face it, the GOP has a “nice” way of insulting Latinos and immigrants, which probably coincides with the 29% who felt Trump should have said it differently. Be nice, but we still won’t vote for you, might be the message.

Frankly, what the poll found is not surprising. That Democrats, throughout this Trump media frenzy, have simply pointed and blamed on the issue is disappointing. This is an opportunity to lead on immigration reform, deportation reform, and immigrant warehousing (detention)–and that goes for Bernie, too–along with the rest of the issues in which Latinos poll strongly progressive. Whether Dems will wake up to this is still yet to be seen, so, here’s another opportunity.