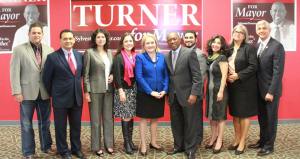 Today is Early Vote Saturday for the 2015 Mayoral election, and according to some of my friends in the know, Latinos made up 8% of the total vote cast, thus far. No doubt, this is dismal, and if Latinos expect to play an influential part in this election, Latino turnout must increase–and in favor of Sylvester Turner, Chris Brown, Amanda Edwards, David Robinson, Richard Nguyen, Mike Laster, and Jason Cisneroz.

On Friday, Mayoral candidate Sylvester Turner earned the endorsement of Congressman Joaquin Castro, who served in the Texas Lege with Turner.

“…I saw firsthand his commitment to working on the issues that matter to Houston’s middle class families; jobs, education and opportunity for all. Sylvester will unite the people of Houston and move the city forward.”

Former Mayoral candidate Adrian Garcia held a press conference outside of Moody Park to urge Latinos to come out and vote and support Sylvester Turner.

“Houston’s future is too critical for our city to be allowed to go back to basics,” said Garcia.  “If you don’t vote, we risk setting our city on a backwards course.  Everyone, especially Hispanics, should vote for Sylvester Turner for mayor.”

“Sylvester will build bridges and collaborate with our schools,” Stipeche said.  “Every child deserves a bright future.  I urge everyone to vote for Sylvester Turner, a leader who believes in that bright future.”

Turner has long been a supporter of Latino issues, while also defending against some of the worst policies offered by Republicans (who support Bill King).

Turner also offers the best and workable solutions to Houston’s challenges, whether it increasing public safety, fixing our streets, or expanding economic opportunity for all–and through fiscally responsible methods.

I urge Latinos in Houston to vote Sylvester Turner. Today (Saturday, 12/5/2015) is a gorgeous day. There is no excuse to not show up at the polls. VOTE TODAY!

IF WE DON’T VOTE – WE WON’T MATTER

This entry was posted in City of Houston, Cultura, Elections, Local Politica, Uncategorized and tagged 2015, city of houston elections. Bookmark the permalink.