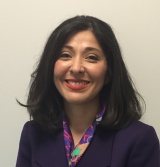 Congrats to one of my favorite great minds in the world, Juliet Stipeche, on being named Mayor Sylvester Turner’s Director of Education. It isn’t often when one meets such an intelligent and forward-thinking individual who has been able to push through the political muck and still end up being productive–and for all the right reasons. She’ll be great at this job.

“Juliet is very passionate about education and children and I share that passion,” said Mayor Turner.  “She is a visionary with transformative ideas.  Her collaborative approach of working with parents, administrators, business, law enforcement and neighborhoods will help achieve my goal of moving this city forward and reducing the income inequality that is so often the result of deficiencies in the education system.”

Stipeche comes to the mayor’s office from Rice University where she was Associate Director of the Richard Tapia Center for Excellence and Equity.  She spent five years as a trustee on the Houston Independent School District Board, including serving as President in 2014.  Since 2007, she has been Shareholder of Counsel at Nagorny & Stipeche, P.C.  She has written and presented lectures on nearly 20 topics ranging from demanding excellence in education to empowering students in today’s world to educating for equity in Texas.  Her law degree was earned at the University of Texas and she graduated magna cum laude from Rice University with a B.A. in Political Science, Policy Studies and Religious Studies

“The creation of this new position is meant to compliment, not compete, with the hard work of our area school districts,” said Turner.  “Creating the strong, well-educated Houston of tomorrow will require everyone working together.  Juliet is the perfect choice for ensuring my vision gets implemented.”

“I am excited and deeply honored to work with Mayor Sylvester Turner, who is committed to building a City where educational equity and opportunity exist for every child regardless of zip code,” said Stipeche.  “I look forward to collaborating with fantastic community partners to build lasting relationships to promote educational excellence in the City of Houston.”

This entry was posted in City of Houston, Uncategorized and tagged 2016. Bookmark the permalink.