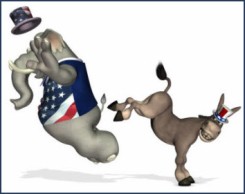 It was the kind of run-off that mostly had good candidates. I picked my favorites and went 3 – 5, and other races, I didn’t even pick. Still, come the time to click [REFRESH], there was a little excitement.

Big congrats to Ed Gonzalez who will be the Democratic nominee for Harris County Sheriff. I’ve known Ed for a while and I’ve always given him my support. I think he’d make a great sheriff; actually, I think he’d be great in any position to which he sets his mind.

In the 61st District Court, Fredericka Phillips had a great election day and squeezed out a 200+ vote victory over Julie Countiss, who had a strong mail ballot showing. This was the most exciting race of the night as we awaited the results and saw an exchange of leads.

Constable Chris Diaz of Pct. 2 had a decisive victory in his race earning over 72% of the vote. Congrats, Constable.

I’d like to give a huge tip of my sombrero to Tanya Makany-Rivera, candidate for JP Pct. 1. She was outspent by a lot and took on some heavies in the local establishment, but she never gave up until the last vote was cast. She’s good people and I hope to see her on the ballot again in the future. Congrats to Eric William Carter who won the race. I met him during the race and he’s personable and friendly, which are a couple of qualities needed on the people’s court. Good luck to him.

To my friend Rabeea Collier–You ran great race for the 11th District Court! I met Rabeea back in 2008 when the Hillary-Obama race was at its hottest–during Senate District Convention. She fought hard for her Obama delegates, while I fought hard for the Hillary delegates. It was quite fun. She’s another candidate I hope to see on the ballot in the future. Congrats to Kristen Hawkins who will carry the Donkey flag toward November. She’ll be a great candidate.

And congrats to all the Dems from the top to the bottom of the ballot.