Well, I’m going for a record. I’ll attend all three nights of Festival Chicano 2016 and write a review for each night. Festival producer Daniel Bustamante never fails and filling each night with the best Tejano talent, but 2016 seems to be pretty special, and Thursday truly was. 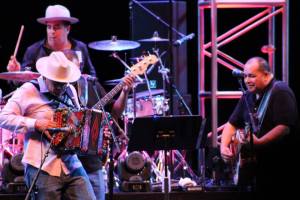 The evening opened up with conjunto titans Los Monarcas de Pete y Mario Diaz. Spanning three generations and five decades of existence, the band took the stage and played a one-hour non-stop gig. Ranchera after Ranchera, Los Monarcas took us through various hits and conjunto standards. They threw in a couple of cumbias, but returned to their tried and true foot-stomping rancheras. It was a great start to the festival. 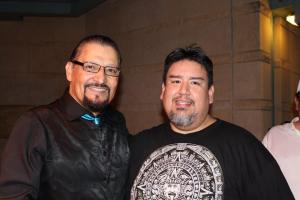 Next up, the legendary Voz de Oro, David Marez and his band People. Marez took us from his new material off of his Tejano Music Award nominated album, Groovin’ (No Soy El Mismo and Le Meneas), to his 80s and 90s hits (No Se A Donde Ni Con Quien and Dile Tu), and all the way back to his younger days as a member of The Royal Jesters (Yo Soy Chicano).

Beyond that golden voice and awesome musicians, he showed much appreciation for the crowd, which gave that appreciation right back. Acknowledging 37 years of Festival Chicano, he gave us all a lesson:  Tejano is our music and where we’re from, but we are Chicanos. That hit me right in the feels. 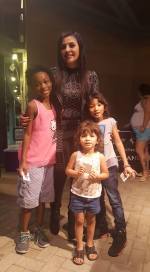 Tejano Diva Elida Reyna and Avante hit the stage while I was waiting on David Marez to get a photo and have a short conversation with him, but one could hear the music as Reyna also went through some of her hits–rancheras, cumbias, and ballads–earning a pretty loud response from the crowd. Unfortunately, no pics of her performance by this blogger, but I did borrow this one from Proud2BTejano–the kids love Elida’s power-packed performances. There are some pics out there on the internets, though.

Next review is for Friday’s line-up of Little Joe, Adalberto Gallegos and The Latin Breed, and new singing sensation Isabel Marie. Stay connected!