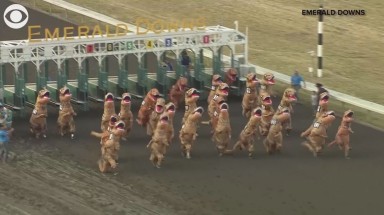 One thing is for sure, we will have plenty of run-off races in December. That’s what we get when our elections look like that T-rex race we’ve been watching on social media.

Local news seems to be blaming County Clerk Dr. Diane Trautman for the delays, but the reality is that orders came from Greg Abbott’s minion at the Secretary of State. Instead of using multiple secure counting stations to report the results, Abbott and minions required Harris County to bring all 750+ ballot boxes to downtown–and brought in by law enforcement! (I actually saw cops taking ONE box out of an SUV.) With hard-working poll workers having to run the election all day, close up and put away all of the materials, and then take them to one of 30 drop-off locations and only to have them brought into downtown by a few constables, and then basically reported manually, well, there were delays.

Was this a planned thing by the Republicans? I think so. One way or another, it’s an attack on democracy. Kudos to County Clerk Trautman on opening up voting opportunities around the county. And kudos to her staff for all of the hours they have put in to ensure we have results.

The Republicans are showing us they don’t like to lose in the big cities,  and that we’ll just have to wait on our victories a few extra hours.

The push toward 50% plus 1 that we hoped materialized didn’t, yet Mayor Sylvester Turned did earn over 45% of the vote. Bottom line, Mayor Turner ran a great race against a couple of of no-idea naysayers who only complained about the Mayor and offered nothing to vote for. And topping the list is Tony Buzzkill whose “disjointed” (I’ve heard drunk) speech last night showed us what we’d get. So, we know what we must do:  Vote Turner!

Looks like we are in for run-offs in all of the At-Large races. Raj vs Knox; Robinson vs Davis; Carmouche vs Kubosh; Dolcefino vs Plummer; and Alcorn vs Dick. I’m sure they are all relieved with the Mayoral run-off at the top of the ballot.

I’m looking forward to continuing my support of Tiffany Thomas in District F who had some great numbers last night (around 39%). I’m still rooting for Isabel Longoria in H, Sandra Rodriguez in J, and Tarsha Jackson in B. And a big congrats to Robert Gallegos who handily defeated his opponent and a bunch of bigoted episodes from naysayers.

Like I’ve said, I live in Alief ISD but just barely. Still, the kids HISD pumps out affect me, so, something must be said. Two Latino incumbents will be replaced by newbies. At least one of those incumbents offered up toxicity that has basically reached other incumbents, especially the one who lost last night. There are a couple of other incumbents who have been affected by this toxicity, but they aren’t up for re-election for another couple of years. I’m hoping the crud dries up and flies away as this new board begins to work–if given the chance by the State of Texas. If anyone had asked me, I would have advised to stay away from the toxic crud, but no one asked. Being pro-Latino is a good thing, but you need to watch for who is leading the way.

Monica Flores-Richart is the obvious choice in this race against a bigot. She has worked hard for a long time–I’ve known her since she was working Diane Trautman’s campaign out in the ‘burbs and wish her a decisive victory,.

With so many running, who would be the top two was always up in the air–at least until the early vote was announced. The end-result is a run-off between Democrat Anna Eastman and Republican Luis La Rotta. A couple of other Latinas who I expected to have a bigger showing did not. And, now, I’m thinking about changing my name to Adrian Garcia and running for County Commissioner Pct 3. Anyway…

Kuff has his own thoughts on the election. Thanks to him for all of the interviews and work he puts in to keep us informed.

This entry was posted in Accion, City of Houston, Cultura, Elections and tagged 2019 elections. Bookmark the permalink.