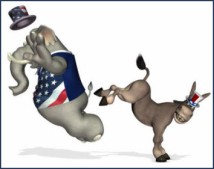 As far as Texas Democrats are concerned, I’m sure we are all glad it’s [almost] over. For DC, well, it wasn’t the best night for those I supported. Still, it’s on to November like the good little Democrat I try to be.

Royce West’s campaign against the Democratic Senate Campaign Committee (and MJ Hegar) fell short, but I sure am proud of my friends who worked on West’s campaign and came up with a respectable result against the odds and the DC cash. We shall see what kind of campaign is run against Cornyn, now. Issues? Trump? Both? Will the DSCC even stick around? Questions that must be asked and answered, and now.

Family friend and fellow Cristaleño, Roberto Alonzo, gave it a go for Texas RR Commish, but it was obvious that Chrysta Castañeda was too much to overpower in the big cities. Still, we are proud of Roberto and the whole Alonzo family because they just don’t give up when it comes to the issues that matter.

Michelle Palmer cruised to victory in her race for SBOE-6, as did Te’iva Bell for the 339th District Court. Judge Alexandra Smoots-Thomas was soundly defeated by Cheryl Elliot Thornton for the 164th. Thornton is well-qualified and will be impressive in November. Cheri Thomas came up short for one of the appellate court seats against Tami Craft, but she is a great candidate who should remain in the game for future consideration. And Mark Alan Harrison is on his way to November in his run for Constable Pct 5.

Diana Martinez Alexander ran a great grassroots race for County Commissioner Pct 3 against big money and influence. I’ll still give her credit for being the only candidate in the running to shake my hand when asking for votes at one event I attended with most of the candidates in attendance. After doing some campaign finance sleuthing and seeing how she was outspent, and considering the final result, I must say that I am quite impressed with what she accomplished. She’s another one that should stay in the game because her activism will be an asset to Democrats up and down the ballot.

The race that was the most interesting was Texas House 148 with Penny Shaw and incumbent Anna Eastman, who won a special election to replace retiring Jessica Farrar earlier this year. No doubt, Eastman has said the right things on most issues important to Democrats, but it was Penny Shaw who may have gotten a late boost because of the policy differences she had with Eastman on public education and the out-of-town PACs that filled Eastman’s campaign coffers. It always seems to be the difference in these races–Teacher Unions -vs- Big Charter School Money. In this case, it was the union-supported Penny Shaw winning the early voting period and election day to put her over the top. While one side blames “negative campaigning,” it really was all about who turned out the most votes from their targeted base. I mean, c’mon, it was 200 votes difference. In non-COVID times, that would be a candidate attending a quince in the northside as the difference. As this is a Democratic district, Shaw will likely win in November.

Akilah Bacy cruised in HD138 and it seems incumbent State Rep Harold Dutton will squeeze by to another term. Incumbent Constable Chris Diaz was unseated by Jerry Garcia by less than 300 votes. Again, whomever turns out their base wins, no matter how negative it gets.

In Austin, it looks like State Rep. Eddie Rodriguez and former Travis County Judge Sarah Eckhardt will be in a run-off later this fall for Senate District 14. While this special election brought out Republicans to support their own, it’ll be interesting to see which candidate Republicans choose as their candidate. It could be the difference in the race if Republicans decide to even come out.