Little Joe y La Familia headlined Friday night’s line-up at the 36th Annual Festival Chicano. Energized by another SRO-out crowd–including thousands seated on the hill–La Familia returned the favor with an energized show packed with hits and a couple of surprises.

Heading toward 75, Little Joe has not lost the voice and stage presence that made him an international superstar who has recorded and toured with greats, such as Willie Nelson and Tierra. Kicking off the gig with a medley of his early hits, such as  Cuidadito and La Bola Negra, the hits continued. Even Little Joe felt the energy of the crowd when the they joined him on Prieta Linda.

In between, Little Joe would bring out Neal Sharpe who would offer some R&B, as well as Houston Jazz pianist/keyboardist and La Familia alumnus Gilbert Sedeño for an instrumental version of Mañana de Carnaval–flawlessly and without having rehearsed prior to the concert.

A poignant moment came when Little Joe brought out Festival organizer/founder Daniel Bustamante to recognize his most recent achievement:  Recognition by Mayor Annise Parker as an Hispanic Heritage honoree for Arts in the Community. Daniel will receive his award on Monday, October 5. A well-deserved recognition after 36 years of organizing an even which attracts thousands of Chicanos/Mexican Americans for a weekend of beautiful music and culture.

Earlier in the evening, we enjoyed the sounds of Cañonazo and Acordeon powerhouse AJ Castillo. So, it was a great night of dancing in your seats (since the union ushers didn’t allow any dancing in the aisles.) The best way to celebrate this event is with friends and family and I was lucky enough to enjoy it with both. Until the next Festival Chicano, ¡Que viva La Musica Tejana!

Kudos to Council Member Robert Gallegos for attending the event. It was a great opportunity for some hand-shaking, especially during the hour-and-a-half prior to the event while folks were picnicking. Too bad other candidates didn’t take this opportunity to do the same; although, I did hear of a few at the other festival down the street. Anyway… 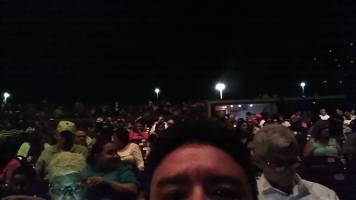