Posted on March 9, 2018 | Comments Off on Beto’s South Texas Problem Isn’t A Problem 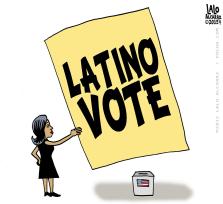 Much is being said about Beto O’Rourke’s losses in various counties in South Texas to his opponent Sema Hernandez. I’m not saying either was a better or worse candidate to voters in those areas. Hell, I liked both of them. But stuff like this happens. It’s also argued that the same happened for Lupe Valdez, Miguel Suazo, and even Roman McAllen. (Some of us visit McAllen when we visit La Virgen.)

Chicanos in South Texas enjoy voting for Chicanos (or people they think are Chicanos). And there’s nothing wrong with that when Chicano representation at the top levels is dismal and you’ve got a bunch of mean gringos (bad anglos) and vendidos (Cruz) trying to build walls and threatening the well-being of families and communities. The familiar is a lot more warm and fuzzy sometimes to a lot of people of different colors and groups, but it seems people only get mad when Chicanos do it.

Why get mad at South Texas when little has been done in the form of outreach? You can visit most of the counties (Beto) and still miss most of the voters. I mean, I’m not afraid to say that Beto probably saw the same people over and over again at his Houston visits since these events are sold to Democratic activists and not your regular voter. (I didn’t attend any of them.) The differences between March and November voters is pretty obvious too. I’d even venture to say that social media targeting is a lot easier in a big city than in rural areas, since that was the tool of choice for many campaigns. But did they even try in Rural South Texas?

Advertising in South Texas newspapers and radio stations is relatively cheap, compared to the big markets Democrats complain about not being able to afford. Perhaps some ads and outreach to those news and info sources may have helped. Hell, they’re cheaper than a politiquera (google it), that’s for sure.

Beyond all the whining, most of the Democratic counties still vote for the Democrat on the ballot by huge percentages when November comes. Of course, turnout could be affected because you’re talking about a lot of rural Chicanos that might go ignored by campaigns in favor of the big Democratic cities. Well there’s a cost to just about any campaign strategy that is chosen. Figure it out!

Ted Cruz’s idiocy about “Beto” notwithstanding, Beto’s not the first gabacho (not a bad anglo, just an anglo) to use a nickname familiar to Chicanos. Who knows, it could become endearing to folks once they get to know him. But they do need to get to know him and everyone else on the ballot.

Democrats complaining about South Texas just need to stop because that kind of elitism bordering on something else is unbecoming. I swear, they complain in March because we vote for their favorites’ Chicano opponent, then they complain in November when not enough of us vote. In the words of Eddie Olmos in the Selena movie, “It’s exhausting!”

Until Democrats (including elected ones in South Texas) perfect the whole political education thing in South Texas, low information, name-based elections will continue. Let’s all work on it.