Posted on December 21, 2017 | Comments Off on #DeportationCaucus Ignores DREAMers, Votes For CR

DREAM activists were all over Washington, DC and the US Capitol this last week, some even thrown in jail, attempting to persuade Democratic representatives and Senators to vote against a continuing resolution which left out relief for DACA beneficiaries (aka DREAMers). The CR passed with 66 votes, including a whole mess of Dems.

Specifically, activists were asking for a clean DREAM Act, but since Republicans and Trump failed to move the needle on it, activists then called on the only group they thought would be allies–Democrats–to vote against the continuing resolution with the hopes of a shutdown or at least a show of strength. Instead, a list of electeds now called the #DeportationCaucus was created, and a whole lot of Democrats are on it. And there’s also a list of Dems in the House.

Needless to say, negotiations are supposed to continue in January; however, what “enforcement” and “border security” provisions will be added by Trump are still not known. Certainly, it won’t be a clean DREAM Act given Trump and the Republicans’ hell-bent attitude toward immigrants. The Dems on the #DeportationCaucus are certainly a list of Senators to lobby, though, it’s probably too late to target them in the Primary.

So, here are the Democrats on #DeportationCaucus: 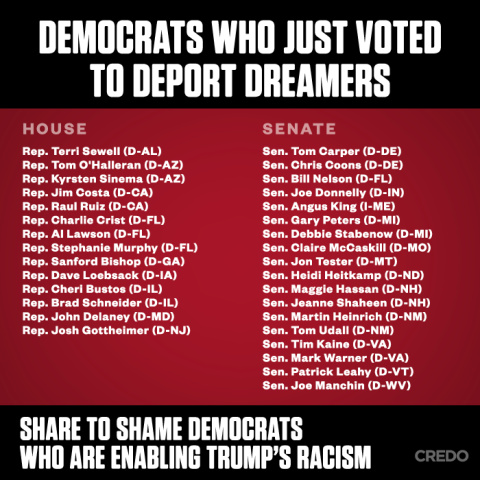 Comments Off on #DeportationCaucus Ignores DREAMers, Votes For CR

Is This The Week for Executive Action?

Posted on November 17, 2014 | Comments Off on Is This The Week for Executive Action?

The “will he or won’t he” question is yet to be officially answered, although, there is movement toward President Obama signing executive action to provide deportation relief. Even his Homeland Security guy, Jeh Johnson, is telling us as much, and, as always, “by the end of the year.”

A major hurdle to making any executive action work is in the discussion and getting hotter. Much like Republicans have tried to de-fund Deferred Action for Childhood Arrivals (DACA), the Republicans are threatening to do the same to anything the President signs through a budget tactic.

What might be held hostage is a continuing resolution to fund the government beyond the upcoming December 11 deadline.

Conservative members in both chambers want to pass a continuing resolution to fund the whole government with language that expressly prohibits using federal funds to enable any executive action on immigration policy, blocking funding, for instance, of work-authorization documents for illegal immigrants.

Even our own Senate minority leader Harry Reid has encouraged the President to not sign anything until Congress passes the “CR.” Of course, there will also be some Senate Democrats who went down in flames in 2014 even after the President delayed signing executive action for them who will likely side with the Republicans because they have this illusion that they will make a comeback in the future. Also, Claire McCaskill is sounding like her usual anti-immigrant self, although she did vote for the DREAM Act in 2010 after much arm-twisting and narrowing of the proposal.

One scenario mentioned in the National Review article cited above is if the President decides to wait until after the December 11 deadline to sign executive action, the Republicans will pass a short-term CR before the December 11 deadline to keep the government funded  until the new Congress comes in, then, the new Congress can put in the anti-immigrant language into a longer-term CR that de-funds Obama’s action. Whether the President would sign such a CR and, along with the anti-immigration Republicans, shut down the government is the bigger question.

Either way, Republican pettiness will seem obvious, as the President has the legal standing to sign whatever he wants. That the Republicans would hold the American government hostage says a lot more about their feelings toward immigrants, the vast majority being Latino.

With the understanding of the politics behind the continuing resolution, do we want the President to wait until after December 11? Or do we want the fight to begin later this week?

Comments Off on Is This The Week for Executive Action?