Posted on May 9, 2020 | Comments Off on Did You Hear Rick Treviño’s Cinco de Mayo Song? 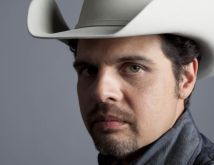 When I saw that Rick Treviño had a new single called Cinco de Mayo, I immediately thought, “What the heck is he doing?”

I immediately went to memories of Little Joe’s Dieciseis de Septiembre which I first thought was hokey back in the 90s, but I accept more now because of issues regarding Chicano culture and identity that I like to research.

Trevino’s Cinco de Mayo starts off a little hokier speaking to the usual drinking and partying ID that the holiday has. But he manages to deliver a message if you listen closely, as well as a strong piano and horn samba sound.

Uh, did he just do some reverse stereotyping that I enjoy sarcastically doing? If so, Right On!

Did he just make a pro-migrant political pronouncement?

OK, Rick. I’m liking this tune more as I give it more listens. Whatever the intent, great message. Listen to it on YouTube.

No doubt, Trevino has been on swing of cultural pride in his music. Plus, there are collabs he’s done with greats, such as Los Super Seven, Ruben Ramos, as well as being produced by Raul Malo on some recent albums, among other projects.  So, his creativity is understandable and way different from his Nashville-produced early work.

Last year, with Los Texmaniacs, and then Trevino with Flaco Jimenez, released a single called I Am A Mexican. The tune is about a Mexican’s love for the adopted country that shows its dislike for him on a daily basis. It’s poignant, yet, quite sharp. And it gets quite the response when he performs it live.

Another tune is Cowboys Like Me, with which many can identify with it’s intro lyric, “My granddaddies daddy crossed the Rio Grande, trying to find a better life than what he had…” It’s one of my favorites as my yard had a chain-linked fence, and I loved using my unloaded BB rifle to play “cowboys” in the backyard with friends. (Listen to it to get it.)

Anyway, enjoy the tunes. I’m looking forward to the new album. And if someone whines about it, tell them, “It’s about identity, pendejo!”

I Am A Mexican

Comments Off on Did You Hear Rick Treviño’s Cinco de Mayo Song?