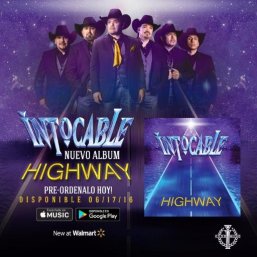 Not releasing an album in three years did not hurt Intocable. Twenty-two years of music has allowed them to amass quite a catalog of hits–hits that make for memorable set lists that always get their sell-out crowds singing along.

Still, one always wonders what else Intocable can accomplish on a new album. They have achieved much in the studio and on the road, but their newest album, Highway, is a project that reminds us of Intocable’s versatility, the excellent songwriters they hang with, and why we always get excited about their “next album” taking too long to be released.

In an interview a few years ago, band leader Ricardo Muñoz stated that he may not be the best vocalist in the business, but his on-stage confidence is bolstered by having some of the best musicians in the business. Highway leaves no doubt about this, especially the bajo sexto creativity of Johnny Lee Rosas. While Rosas recorded the entire album, he recently left to sew his own creativity with a band he founded years ago, Masizzo. Nonetheless, his and Alex Gulmar’s bajo playing on Highway is the best I’ve heard on a a Norteño album.

Although the run-up to the album’s release came with online releases of some of the tunes over the course of a few weeks, the band had been riding on a powerful single penned by Louie Padilla, Tu Ausencia. In another interview, Muñoz stated that the tune was a strong reminder of the loss of his father a few years ago. Having lost my Mom 6 months ago, I must say that as I sing along  to it, I usually get a lump in my throat. Released with an excellent video, the next single and video was a lighter one with Quiereme (Amame), a cumbia.

Highway is definitely a journey of experiences and of emotions. It’s also one of Intocable’s darker recordings, perhaps a journey of their own experiences as a band and as individuals. From love to love hurting to love lost, the band seems to describe just about anything that any given individual has gone through. Tunes like Te Perdono, a ranchera, reveal the pain of love lost by setting standards by which one forgives–and they’re not easy standards:  “Te perdono si un dia traes a Dios hasta mi puerta; cuando vea que a tus ojos salen lagrimas de sangre…” One even feels the sadness of the acordeon.

Equally haunting is the ballad, En La Obscuridad, about moving forward after losing on love, but what remains are the thoughts that cloud one forever. That much is noticeable in the song’s extended musical ending with the haunting back-and-forth of the acordeon and what can only be described as mind-noise in the background.

Intocable also hits on an important social issue, the missing and murdered women of Juarez. Wilfran Castillo’s Dia 730 tells the story of a 17 year-old girl with dreams of becoming famous lured by a man offering opportunities of success only to go missing and probably murdered. This cause has been around for years and the lack of response (few arrests and convictions) continues to instill fear in Juarez. Thankfully, Intocable adds to this discussion, including the pain families go through and the ineffectiveness of law enforcement. It’s a powerful and descriptive tune.

The band also reminds me that they grew up in the same rock era as I did, and Un Dia Sin Ti and Duele El Amor, both rancheras, have tinges of rock guitar and drumming (by Rene Martinez) that effectively set up the songs. The signature Intocable cumbias are also evident, with Cuando Me Vi En Tus Ojos and Sueño de Amor providing some danceable treats.

Intocable also invites a guest lead vocalist, Beto Zapata, on Cuestion de Tiempo, which he delivers quite well. The album is well-rounded out with Cuidare, Usted Me Encanta, and Quiza No Sea Tarde, making this a musically diverse album.

You can find the new album on various online outlets, but also exclusively for sale at Wal-Mart. Kudos to Ricky and the crew on a great production. They keep proving that independently produced records are the best ones out there.

Jaime de Anda y Los Chamacos have released their latest album in years, Born To Be Bad, and, let me tell you, they haven’t lost their touch. Under the direction of Grammy winning producer Gilbert Velasquez and his brand new VMB Music Group label, Los Chamacos have offered up a strong collection of tracks, including some classic Chamacos tunes.

The first single, Todo Para Mi, is a very danceable ranchera with the noticeable participation of Velasquez on guitar. With a smooth beat in which one can either hold their partner close or take on a bunch of vueltas, this tune is definitely a favorite of mine. But, the album leads off with another great ranchera, Alma Enamorado, which is classic Chamacos.

Cuando Me Oigas Cantar is a hard-driving ranchera that leaves you no choice but to zapatear featuring Chente Barrera and Jaime de Anda as a duet. Little Joe Hernandez is also featured on Morena, Morenita in what is sure to be a memorable hit. And if that wasn’t enough, RGV legend Rene Joslin (also dad of Roel, Chamacos bajo player) appears on the classic Al Pie De Este Arbol.

Los Chamacos also take us down memory lane with a cumbia instrumental, as well as a remake of the classic medley, Mi Musica Favorita. While the original “Favorita” touched a bit on some of their favorite tunes made famous by legends, this new one adds lyrics and music to each tune–something they had done live for years. Of course, who can forget Ex-Novia? It’s on there, too with some great harmonies.

Conchita La Viuda Alegre, the tune about a happy widow, is another classic that Los Chamacos bring to life. Estrella Blanca is a classy bolero that brings out the acordeon and bajo sexto, along with some harmonies that make this a powerful tune. All-in-all, fans will enjoy this production.

I’ll have to say this:  Gilbert Velasquez has taken a classic Tejano Conjunto that had already made their mark and brought out a much bolder sound from them. That’s why I like indie labels, because this one in particular doesn’t do things in cookie-cutter fashion, in my opinion. Congrats to Jaime y Los Chamacos on this amazing production.

Comments Off on DC Reviews: Jaime y Los Chamacos ~ Born To Be Bad

Posted on March 1, 2014 | Comments Off on DC Reviews ~ Flaco Jimenez and Max Baca – Legends and Legacies

No doubt, there is a back story to this production as some of these are classic songs once recorded by Flaco’s dad, Santiago Jimenez, Sr. 70 years into his career, Flaco is among the legends of Tex-Mex, much like his father. For Baca, it is an opportunity to take his place as part of a legacy in the Tex-Mex genre having grown up as a part of Flaco’s musical family–even calling him a father figure in his life. And for listeners, we get the opportunity to enjoy some hard-core Tex-Mex conjunto music with some amazing button-acordeon from the legend and some of the most dexterous bajo sexto shredding from Baca.

When you add some drums to the mix, you get some powerful polkas rancheras, like Cada Vez Que Cae La Tarde, El Pesudo, Borradita Diente de Oro (The DC favorite), El Parrandero, the funny Brincando Cercas, and the even funnier La Viejita. La Nueva Zenaida and Ay Te Guacho Cucaracho will definitely be crowd favorites.

Cumbia lovers get the tried and true, La Mucura. The closer is another favorite, Fiesta Alegre.

And yes, in case you weren’t counting, that’s seventeen (17) tracks, which makes this production a lot more awesome than most. Seldom do we get this many classic tracks which are given the musical respect they deserve. Baca’s bajo sexto complements Flaco’s acordeon, and vice-versa. More than anything, it seems this duo is trying to school us on from where it is our music has come because it’s always good to come home to our roots. And to take from the liner notes”:

A common goal of Flaco and Max is to gain respect for their musical legacy beyond their Texas Mexican community while making the point that the roots traditions of all people deserve that same respect. “There’s a space for all kinds of  music,” Flaco says, emphasizing that he respects other musics and the people who carry them on in the space where “les nace” (they are born). He is pleased that his efforts have led people of other cultures to play his music: “There are Japanese, Italian conjuntos. In Paris, too. They play well because they emulate the roots that we have here in San Antonio.”

Rounding out the studio line-up are Flaco’s son, David on the drums, and Texmaniac, Oscar Garcia on the bass.

NPR had a great report on the new production last week. Give it a listen. It’s good for those who need to be schooled on Tex-Mex conjunto music.

The new music is available at Itunes and directly from Smithsonian Folkways.

The Voice, Jay Perez, is back with a new production, New Horizons. The 12-song release is quite the piece of work, produced by Grammy-winning Gilbert Velasquez and supported by Freddie Records. Perez’s recent works have been on mostly indie labels, but his new label provides a lot of backing in regards to marketing and promotions. The tried-and-true Perez style is not lost as Velasquez has worked with Perez many times before–even being a part of his original band.

Kicking off with Tu Ultima Cancion, Jay’s fans immediately hear the signature ranchera sound–keys, sax, acordeon and a hard-driving beat, and some great lyrics giving someone the kiss-off. Known for his slowed-down,  acordeon-driven zapateadas, Perez does not disappoint with the first single, Lo Tengo Que Admitir, an ode to the girl who gave him everything.

And the cumbia stylings do not disappoint, either, with their R&B flair. Demuestrame, with it’s catchy chorus, and Vivir Sin Ti, will definitely be live favorites. Especially Vivir, with some awesome percussion providing the rhythm.

Perez brings out a horn section, a-la Latin Breed, to give us a fine ballad, Tu Amor No Me Pertenece. The guitar, horns, and acordeon provide a smooth foundation on which Perez provides a soaring vocal.

Perez offers up plenty more signature rancheras to keep toes tapping and feet on the dance floor. Tengo Miedo and Dos Caras with some powerful lyrics and smooth rhythms are some personal favorites. But Perez also dusts off a couple of songs previously done by the late Laura Canales during her comeback in the 90s. Amor Escondido,with a driving sax solo, and Yo Quiero Que Vivas Conmigo are very welcome by this Laura Canales fan.

Finally, Quien Te Dijo and Tu Partida close out the catalog on rancheras, showing Perez is very committed to keeping La Onda Tejana alive and kicking ass. Partida with an excellent sax/acordeon solo, and Quien Te Dijo with a driving ranchera rhythm. Finally, Perez closes the release with an R&B tune, All of Me, which shows off his vocal abilities.

Providing the power behind all of the tracks was Perez with some of the best vocals I’ve heard from him. The man just knows how to deliver lyrics in a way that makes the listener feel their meaning. Combined with a tight band, he is also able to deliver these songs live like few can.

Get your copy at just about any store that features Latin music, or online at Freddie Records.