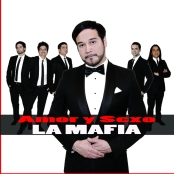 After a long time without a studio album, the Pride of the Northside is back with the much anticipated Amor y Sexo. While the music is “pura Mafia” the playlist is a bit different.

As any Mafioso who grew up with them in the Tejano 80s, weathered their change to a more international sound in the 90s, and have enjoyed them bringing all of their sounds back into play in the 2000s, this new production was still a bit of a surprise.

Sure, there are three rancheras–more than usual; but only one cumbia. That’s right, four ballads, two valseadas and a jazzy dance tune round out a slightly different production, but one that keeps the Mafia sound intact.

Seria Mas Facil and Una Cancion Para Olvidar are strong horn-influenced and acordeon-infused rancheras. The latter has some powerful harmonies, too. The acordeon-heavy Protegere Nuestros Recuerdos is a short, but powerful ranchera about a loves end, but with some great memories stored away in case of a return.

Quiero Amarte is the sole cumbia with some pop influences that could make it a fan favorite when played live.  It’s already one of my favorites.

Among the ballads, Provocación is my favorite with its rising chorus and piano-led melody. A surprise tune is the horn-driven jazzy dance tune, Soy Facil, which translated is “I’m Easy.” Great guitar solo in this one. Todo Dama Lo Amerita offers a mariachi- and trio-esque international ballad which fans will enjoy. The opener, Me Mata, and Amor y Sexo are reminiscent of the 90s power ballads that put La Mafia on the international map.

No Me Abandones, restyled from a ranchera on 1989s Mafia Mania, is the quintessential booze-it-up valseada to beg a lover not to leave. Its horn and acordeón arrangements are superb. Adonde Va El Amor is a similarly-styled vals driven by the bajo and acordeon.

Big kudos to Oscar de la Rosa for continuing to school some of the new talent out there on how to sustain a voice 30-plus years later. Mando Lichtenberger deserves a lot of credit as the producer and arranger, too. These guys just haven’t lost their touch.

The new stuff is available on CD and MP3, so it’s available at your favorite big box or online store. Add it to your collection.

Oscar de la Rosa and the band have been around for over 30 years. Dubbed, “the pride of the Northside,” La Mafia was one of the first Tejano bands to break into Mexico and the rest of the Americas. Recently, they have continued a busy touring schedule across the U.S.

Personal story:  The first time I caught La Mafia was around 1983 at the Crystal Ballroom in Crystal City–I was 12. The opening band was fronted by a talented 12-year old vocalist named Selena Quintanilla.

Fans may pre-order the new music on iTunes starting on May 5.