Tag Archives: latinos on the ballot

Latinos on the Ballot 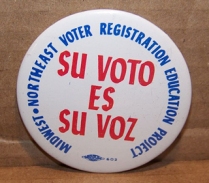 There was an article in the Chron recently about the record number of Latinos on the ballot of both primaries. Of course, there were multiple people running in some races, such as Congress District 29 and Commish Pct. 2. Still, at the end of the Democratic Primary, how many Latinos have been left on the island?

Well, since most Latinos in Harris County live away from areas represented by Latin@s, I’ll use my own ballot as an example. At this moment, Democrats have the potential for 12 Latinos on my ballot. Of those 12, three are in run-off races, including Lupe Valdez who is running for Texas Governor, Richard Cantu for HCDE At-Large, and Cosme Garcia for County Treasurer.

But for sure we in Harris County will see names like Suazo, Lacayo, Hidalgo and Rodriguez on the ballot. And there’s even a Fleischer (es hijo de Chilenos).

In case you’re asking about the dark side (GOP), there are eight on my ballot, including one in a run-off. Of course, being Latino doesn’t necessarily mean they support the issues that are important to Latinos, and Ted Cruz, Little Brown Bush, and the rest are not with us. Just to be clear. And we should never be afraid to say this. But anything for a “record breaking” article, I guess.

And that’s what’s important about ballot diversity. Representation goes beyond the Spanish surname. It’s about voters having a diversity of candidate stories with which they might identify to make the polls more inviting. In other words, a ballot that looks like Houston and Harris County.

But, most importantly, it’s about who’s fighting for you and your issues. Who’s standing up for public education, jobs, immigration reform, and access to health care/ And in these days of trumpism, we need all the fighters we can get.