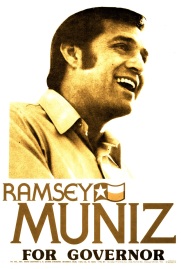 Although I had heard through activist friends that Ramsey Muñiz had been released in mid-December, the AP finally reported his release from federal prison a month later.

Muñiz, a policy-saavy, charismatic, well-spoken, Baylor-educated lawyer, was La Raza Unida Party’s 1972 gubernatorial candidate. It was those qualities he effectively utilized to put a scare into the Texas Democratic Party by earning over 210,000 votes in a three-way race which almost ended the career of Dolph Briscoe and Democratic power in Texas. The usual historians write it off as Muñiz only garnering 6% of the vote, but it was 210,000 Chicanos who united in calling out the Democratic Party for their lack of respect of the people.

Although La Raza Unida had achieved much in various South Texas counties and even fielded candidates in Houston and Harris County, it was this venture into Texas politics that helped earn it a special place in Texas political history. LRU even fielded a Chicana for Lt. Governor. And it also caused a change in the way Democrats treated Chicanos in Texas–some might say, at least on the surface.

During the time, as Chicano scholar Dr. Jose Angel Gutierrez found out through FOIA requests, the FBI targeted various Chicano activists through surveillance and other methods. Chicano political activity was constantly under attack and effectiveness was always challenged because those in power would never allow for shared political power with Chicanos. Gutierrez has a new book coming out in March in which he details the surveillance of the Democrats’ favorite brown person, Cesar Chavez.

It is said that Muñiz was among those targeted when in 1976 he was charged federally with attempting to smuggle marijuana into the US from Mexico. After pleading guilty to one count and being sentenced for 5 years, La Raza Unida Party lost popularity and died a slow death, while Democrats picked up what was left of Chicano activists who were salvageable for political purposes. Later, he’d be charged two more times, thus given a mandatory life sentence in federal prison.

Many believed Muñiz to be a political prisoner imprisoned on false charges, forced to plead out in order to save himself from long-term sentences on the first two charges.

A mandatory life sentence from a 1994 charge, though, is what caused him to reside at Leavenworth the last 24 years. Yes, a military prison for what are small-time charges compared to cartels and major drug dealers. Like other prisoners deemed to be imprisoned for political reasons, he requested early release from Presidents, including Obama, only to be denied. Because of failing health and age, he was finally released on December 10, 2018.

There is little doubt that the burgeoning activism in the Chicano community of the time was demoralized by those in power. That voting and activism in the community was at an all-time high during the time only to be cut off at the knees perhaps shows why Chicano voting patterns have taken decades to improve. No doubt, there is a lack of trust of anyone in power and with good reason. We are seeing similar responses to recently elected Latinos with strong opinions–just a thought.

Anyway, I’m glad that Mr. Muñiz is home with his wife, Irma, whom I met in 2003 at a conference I helped coordinate at Texas State University. She and a close circle of friends never gave up on achieving his release. And he’ll always be considered one of my influences as far as political communication is concerned.