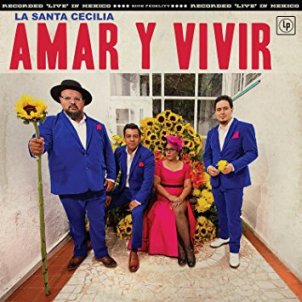 Released just in time for their arrival to Texas, La Santa Cecilia’s Amar y Vivir can only be described in a word:  Special. It’s a visual album, with already a few videos of their album performances on YouTube.

It’s traditional, it’s modern, and it’s full of love and life. The LA band’s newest production was recorded live in Mexico City at various plazas and locations around the city. With invited guests, such as Comisario Pantera, Noel Schajris, Mariachi America, Rebel Cats, Caña Dulce Caña Brava, Mon Laferte, and the amazing voice of Eugenia León to sweeten the various tunes, we are given a musical effort that will remain timeless.

Equally timeless is the voice of La Marisoul (Marisol Hernandez) who seems to knock every tune out of the park. While the guest artists provide some beautiful accompaniment, La Marisoul provides the emotional push to ensure a strong delivery of the songs.

The title track, Amar y Vivir, a haunting bolero thanks to some exceptional electric guitar playing, opens the album, while the amazing vals, Odiame, follows, both tunes solidifying the requinto as central to the album. LSC resurrects an old favorite of theirs with a mariachi-powered version of Como Dios Manda. Mar y Cielo is a sweet bolero, while the rockin’ ranchera Mexico Americano is a needed prideful addition.

La Santa Cecilia also managed to send me into a bawling frenzy during this Mother’s Day weekend with a beautiful rendition of Amor Eterno. Needless to say, I really miss Flo.

Volver a Los 17 is a beautiful tune, while Mon Laferte joins in on a wonderful vals, Ingrata. Then, we’re provided quite the treat with Smokey Robinson’s  You Really Got A Hold On Me, which La Marisoul simply owns.

Leña de Pirul is an old standard brought to life again, while Nuestro Juramento is a a beautiful bolero that will get your toes tapping along with lyrics to make us shudder. But it’s the last track, En El Ultimo Trago, which La Marisoul duets with Eugenia Leon, that will get a concert crowd to sing-along.

No doubt, it’s the voice of La Marisoul and the requinto-playing of Pepe Carlos that set this album apart from others in which standards are attempted. With the simple instruments of guitars and requinto, percussion, and upright bass, a foundation is set for an album that treats the songs respectfully and without a need to be showy. La Santa Cecilia is a band of musicians who take their music seriously, and this genre-bending LA band can compete with the best of them.

The new production is available on CD and vinyl. Get yours today!

THE CONCERT at HEIGHTS

La Santa Cecilia came to Texas to perform in the Big 3– SA, Houston, and Dallas–and I was able to check out their show at the Heights Theater. It was the perfect venue for them and a great crowd greeted them on Saturday.

LSC started with their bilingual rendition of The Beatles’ Strawberry Fields Forever, to which they once released a video depicting the travels of the strawberries that end up in our fridges–starting from the fields worked by farm workers. A few LSC favorites into the show, the crowd was told that Hernandez was feeling under the weather, so, she wouldn’t be doing her usual dancing and jumping on the stage which in itself revs up the crowd.

Still, La Marisoul powered through Vengo, I Won’t Cry For You, Sucede and other favorites, only taking a short minute break toward the end of their set. Their show included some of their latest tunes from Amar y Vivir, including the show closer, Mexico Americano, which earned some “Power to the People” fists in the air.

As much as one loves their albums, you can tell how good a band is through their live performances and La Santa Cecilia is just one of those bands. La Marisoul proved that the show must go on and she delivered vocal perfection. Catch them next time they’re in town.

Opening for La Santa Cecilia was San Antonio genre-benders Nicolas Valdez y Los Nahuatlatos. They can go from SKA to conjunto to cumbia and return to all three and more in one set. Valdez was quite impressive on the acordeon as was the horn and rhythm section.

I’m looking forward to the next time I catch both of these bands.