Posted on April 29, 2015 | Comments Off on Hillary Clinton Didn’t Say Anything about Mass Immigrant Incarceration 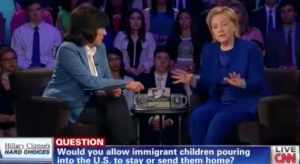 Hillary Clinton was being embraced by her supporters today for her speech on law enforcement and incarceration reforms. But missing from this puzzle was the piece that explains billions of dollars wasted and thousands of lives affected–immigrant incarceration.

It’s no secret that there is much waste in the form of immigrant-hunting in this country. Policies that federalize local cops to participate in immigrant hunting, incarceration, and deportation have been given steroids by the Obama Administration, while Republicans ask for more. . Republican-led state legislatures threaten “show me your papers” and racial profiling laws while awful policies are already in place. These policies have increased the distrust that immigrants and Latinos have of the police

When the media- and politically-driven hysteria about thousands of Central American children and women escaping violence and poverty came about, Hillary Clinton was among those calling for their immediate deportation after they’ve spent the whole time in inhumane private immigrant prisons–no opportunity for release or legal assistance.

So, when Clinton didn’t include this boondoggle that affects families and that has needlessly locked up and deported innocent working people with little-to-no record, and let’s not forget, little kids, it was very noticeable. Perhaps not to her hard-core fans and supporters who are proud apologists for her and the Obama administration, but I certainly noticed it.

It shouldn’t be this easy to ignore the obvious as a presidential candidate with little to no opposition (apologies to Bernie). If we are to have a conversation about police and incarceration reform, then it must include immigrant incarceration and deportation reform. Treatment of immigrants in these private prisons is just about as bad as cops killing people of color on the streets. Clinton and all candidates cannot pretend it doesn’t exist.