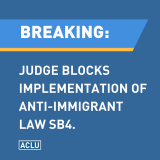 This is great news, even if it is temporary.

During a stressful time of natural disaster in which people have lost homes, cars, property and have had their livelihood threatened, the added stress of having a racist racial profiling law that targets brown people hanging over them is at the very least stopped while it goes through further review.

The judge also determined that vague prohibitions in SB 4 violate due process and “create a real danger of arbitrary and discriminatory enforcement.”

In addition, he found that enforcement of the mandatory detainer provisions “will inevitably lead to Fourth Amendment violations.”

SB4 was to go into effect on September 1, 2017. Now, Federal Judge Orlando Garcia will likely set a date for a hearing to determine its constitutionality. Obviously, we await a response from Abbott and his Republican cohorts who supported this bigoted bill.

Even before the remnants of Hurricane Harvey hit Houston, there was worry in the air as thousands were expected to end up in temporary shelters run by local, state, and federal authorities. Soon, there were rumors that people would be asked their immigration status to receive even the simplest disaster assistance–shelter, food, medical. Mayor Sylvester Turner offered some relief in stating that Houston’s doors were open to anybody in need. Still, a targeted community was stressed.

Thanks to ACLU, MALDEF, the lawyers, the witnesses, the activists, and the cities who joined the challenge. Obviously, this is not over and continued attention and activism must continue to ensure this bigoted law is finally defeated. This is definitely a welcome first step.

MALDEF provided the following FAQ on the decision (click image to enlarge).

UPDATE:  Republican governor Greg Abbott will continue his defense of this bigoted law.

“U.S. Supreme Court precedent for laws similar to Texas’ law are firmly on our side,” Abbott said in a statement. “This decision will be appealed immediately and I am confident Texas’ law will be found constitutional and ultimately be upheld.”

Federal judge blocks #SB4 implementation! No sanctuary city ban for Texas! May not be a final victory, but we won the first round! #txlege