Democrats Getting It All Wrong on Trump Border Army

Posted on April 9, 2018 | Comments Off on Democrats Getting It All Wrong on Trump Border Army 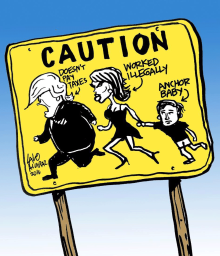 The best response to Trump’s power trip in militarizing the US-Mexico Border is:  “Don’t do it. It’s bigoted. It’s wasteful. It’s wrong. The priority must be fixing the immigration system.”

Instead, I see elected and activist Democrats embracing, “Migration is at an all time low, so, we don’t need the military on the border.”

WRONG! You’re saying that at some point we’ve needed it! And you certainly aren’t offering up solutions like fixing the system.

Perhaps they say it to defend from criticism of President Obama for militarizing the border in 2010. And Obama only did it to beat a right-wing onslaught by Congress to the punch. A race to the right on immigration during an election year. How’d that turn out?

The difference between Trump and Obama? Obama did it with a smile, while Trump does it with a scowl. Maybe that’s why it’s so easy for some of the Dems to be “moderates.” 3 million deportations, hundreds of thousands in the private prison boondoggle, but Trump is the awful one? Yeah, he is. But let’s not be hypocrites. Dems do anti-immigrant policy just as effectively as the other guys whenever there’s an election.

And Democrats don’t want to change. Talk of being “moderates” for 2018 has increased as there are some run-offs to be decided in Texas, but the only issue that seems to make Dems quiver is immigration. It’s the only issue I see where being “moderate” is OK. And treading lightly, if at all, on the issue is the playbook.

Says one activist, “We’ve got the Republicans on the ropes, now is not the time to be weak on immigration.”

Democrats are being weak on immigration by refusing to fight the Republicans.

I’ll be writing more on the upcoming run-offs and how this particular issue is being addressed, or avoided.