Posted on June 1, 2020 | Comments Off on Need To De-Stress? New Tejano Music Will Help!

There’s upheaval in the world. And we’re still in a pandemic that has caused all sorts of financial and personal stress. I find solace in listening to music and my music of choice is Tejano.

The Tejano music industry, like the rest of the industry, has been hit hard by the pandemic. There’ve been cancellations that have turned into small and big livestream events. I’m glad to see that some of my musician friends are still surviving, even if it is one livestream at a time with studio work thrown in there in between. But it has not been easy.

Other artists haven’t been able to do much in the form of livestreams. Logistically and technically it can be tough. But others have released some live material digitally.

In 2020, the Tejano music world was celebrating the return of icon, Joe Lopez y El Grupo Mazz. The pandemic abruptly stopped the tour bus, but lucky fans are getting to enjoy a live album recorded during Lopez’s recent Freedom Tour. And it’s a well-recorded live album!

Lopez goes through his string of hits seamlessly with the newest rendition of MAZZ, featuring Bam Bam Ramos on Keys/Squeeze, Danny Rodriguez on Bass, Aaron Holler on Drums, Joaquin Cura on guitar, and Alberto Gonzalez on percussion. It’s a keeper and enough to keep fans excited about the post-COVID19 return.

The legendary Little Joe y La Familia also released a new live album, Better Than Ever. It’s one of a string of live albums Little Joe has released throughout his career. Recorded at Whataburger Field in Corpus Christi for a LJ birthday celebration, the band goes through a playlist of classics as only La Familia could. 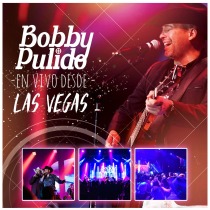 And Bobby Pulido also released Live in Las Vegas. The album was recorded during the Tejano Music Convention and features his dad, Roberto Pulido, and Emilio’s brother, Raulito Navaira as they pay tribute to musicos who have left this world. Those hits, along with the standard Bobby Pulido playlist of hits make for a great live album with strong production values.

So, if you’re in need of live music, there are options. And luckily, some bands have been able to put their live shows on tape.

Even during a pandemic and social upheaval, nuestra cultura y music vive! And it’s keeping many of us going, too.

Comments Off on Need To De-Stress? New Tejano Music Will Help!

Well known and loved by fans since their heyday 90s, the band has not lost its touch. Musically styled after the rock bands we all grew up with, the style pushes through on their biggest Tejano hits through guitar riffs and tough bass lines coupled with horn and accordion playing that can blow one away.

Proof was the perfect location for a mellow crowd who loves Tejano music.  And I would suggest to Proof that they start a Tejano music series. Some of us enjoy coming out to Midtown only to find out that it’s not “$9 beer night.”

Opening band, Grupo Vital, provided an excellent set of covers. Their set-ending rendition of Journey’s Don’t Stop Believin’ was something we all needed since we were all singing along.

Latina-American Women In Music (“L.A.W.I.M.”) is sponsored by organizations, companies and concerned individuals that desire to see a change. Many community leaders, organizations and entertainment icons have committed their support for “L.A.W.I.M.” and offer their extraordinary talent and resources to this cause. Their enthusiasm and influential participation in the community has inspired many to achieve higher goals and we are honored that they have committed and pledged their time to participate! In joining us in these charitable causes your affiliation and presence includes you as a part of making a difference and change in our world. A donation will be presented to the Houston Area Women’s Center to assist them in helping the abused and battered and we will continue to reach out to our communities where the help is much needed and be of support of future events for various causes. “L.A.W.I.M.” has committed to continue the fight for human rights! Your sponsorship and participation will have a real effect on lives in our communities. Please join us so will have a lasting impact in our world! We are thanking you in advance for your support and contribution. For further information, please feel free to contact us! (702)234-9606 or (832)546-9414

Some may know accordion ace Michael Guerra from his days with Los Texmaniacs, Ruben Ramos, Rick Trevino, the Tex-Mex Experience, or his session appearances with Los Lobos, the Texas Tornados, Los Lonely Boys, or others. His recent work with Raul Malo and, now, The Mavericks, are what caught my attention in recent years. The guy is just plain good, as he’s been playing accordion since his mid-teens. Beyond that, he can play several other instruments, truly making his stage presence known.

Guerra and his band just released their debut and self-titled CD. Guerra has produced a style all his own, yet, one cannot help but notice the various influences, be it conjunto, rock, blues, mariachi, or country. It’s all in this eclectic production which fuses into something better than most attempts at “latin fusion.” This one has a special vibe to it.

Kicking off with Voodoo Lady, one notices the rock influences, with Robert Ybarra’s haunting guitar blending with Guerra’s accordion. One may think Los Lonely Boys, thus making the tune quite Texican, but it’s all Guerra and his band. The country tune, My Love’s Too Big (To Fail) caught my attention with the title (I’m in politics, sue me!). In this tune, one immediately notices Guerra’s San Anto influence.

The Los Lobos’ musical influence pops out with La Prietita Loca, with its cumbia rhythm. Of course, the hook, “La Prietita baila muy suave…pero cuando se junta con las chicas se pone muy loca,” is quite catchy. Dreams Gone Blue has a country-mariachi-trio feel to it with some excellent lyrics–and it sounds like it could have been picked up off the cutting-room floor of a Raul Malo CD and given its own flavor.

Let’s Try seems to have a style all its own with a slow rock groove, and is a good introducer to The Who’s Mama’s Got a Squeezebox. The Who could have used a Michael Guerra back then, who really shows off his technique on this tune, as done Ybarra on the guitar solo. On the next tune, Guerra returns to a country-esque/mariachi style with Break Away. The old-style music with modern lyrics make this a favorite.

Guerra does not forget the music that put him on the map–conjunto. And Que Viva Mi San Antonio provides a nice tune with quite the visual of partying in San Anto. Showing his partiality to trio/mariachi stylings, Guerra belts out the classic La Barca backed up by his acordeon, guitars and requinto, showing off his vocal abilities.

The bluesy-rock tune You Set Me Free shows off Ybarra’s guitar again, while telling the story of being set free by a woman who seems to have made the wrong choice.  Ain’t it always the way?

Guerra’s biggest influence and the reason for his music career is his dad Elias. Mike began toiling on various instruments before picking up the instrument that set the path for his career–the acordeon. That said, Mike brings in his dad for the final tune, Dame Un Nuevo Corazon, a gospel song with an acordeon-heavy bolero feel.

It is safe to say that this production is a venture through Guerra’s various influences, yet, it is his signature accordion which sets it apart. This is a great first full production for Guerra. Of course, he’ll have a hard time touring to support it since he’s working hard with The Mavericks at the moment. No doubt, he is going through some career-building experiences.