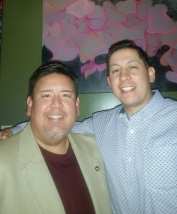 The biggest news from Saturday’s election is that a good friend and associate of mine will be joining the Santa Fe, TX City Council. Fidencio Leija, Jr. won his race for Place 4, defeating an incumbent in grand fashion.

Leija, a native of Santa Fe, returned home to start a family and an insurance business. Known for his commitment to community during his time in Houston, Leija immediately became involved in his Santa Fe community serving on various committees and associations. It was obvious that he’d be a good fit on the City Council and the voters responded quite well to his campaign.

Congrats to my friend and fellow Texas State Bobcat, Fidencio, and his family. I know he will be a voice for the betterment of the community.

Kudos to Cody Ray Wheeler on his re-election to City Council District E for the City of Pasadena. He fended off a challenger while campaigning to continue being a voice of reason on the Council. Also, police officer Ornaldo Ybarra returned to the City Council defeating the incumbent. Unfortunately, Steve Halvorson’s challenge fell short, but he ran a great race. Sammy Casados was unopposed in his race for re-election.

Since I spend a lot of time in that part of the county, I must say that I’m happy the bond passed with over 70% of the vote. Cy-Fair is one of those fast-growth districts that needs the space. In other school news, Conroe ISD, another one of those fast-growth districts, voted down their bond to add much needed space. Cy-Fair was smart. Conroe, not so much.

Looks like there will be run-offs for Mayor in SA and Dallas.

In SA, it’s Mayor Ron Niremberg who was forced into a run-off after falling just short of being re-elected. The race is a contentious one in which a lot of mud has been thrown at Mayor Ron.

In Dallas, it’s State Rep. Eric Johnson who will be in a run-off for the open seat with Scott Griggs. I’m rooting for Rep. Johnson.

Local elections are for positions and boards in which the most important decisions are made. Houston is headed toward November already and there will be some contentious races. Read the facts, instead of the rhetoric, before clicking “cast vote.”

Comments Off on The May 2019 Election – Results

Posted on October 18, 2013 | Comments Off on Progress Texas: Pasadena Plan Discriminates Against Hispanics

I must agree with the folks at Progress Texas who remind us that that Pasadena city council redistricting plan discriminates against Hispanics.

Hispanics are the voice of Texas’ new majority. In Pasadena, the Hispanic population has grown from 48.2% to 61.6% in the last decade. The Republican mayor of Pasadena is doing everything he can to stop that.

A local ballot measure in the city of Pasadena, Texas would remove two single-member council seats currently held by Hispanics and replace them with at-large seats, eliminating the biggest voice Hispanics have in the growing Houston suburb.

Thankfully, the good people from the Texas Organizing Project are educating voters about this plan. It is time for all of you to spread the word and tell your friends and family in Pasadena to vote against Johnny Isbell’s ballot proposal.

Comments Off on Progress Texas: Pasadena Plan Discriminates Against Hispanics

Hearing about election jurisdictions attempting to change voting laws definitely is not a shocker and I expect it to occur more in cities and towns around Texas who have benefited from single member districts in the form of representation. The Supreme Court’s decimation of the Voting Rights Act has caused conservative elected officials to walk around with their chests out while they reverse course on decades of progress on equal rights for all.

Regarding Pasadena, I received this from State Senator Sylvia Garcia:

Pasadena Mayor Johnny Isbell submitted a mid-decade redistricting change to the Pasadena City Charter that alters the city council from an eight single-member district council to a hybrid system with two at large seats and six-single member district seats.  The change will significantly increase the population size of each council seat and depending on the map could drastically harm the ability of Latinos to elect their candidates of choice.  The Pasadena City Council approved the city charter amendment on a 5-4 vote despite overwhelming public opposition in a late evening city council hearing on August 20, 2013.

“This decision by the Mayor and the majority of the Council is exactly the type of change the Voting Rights Act was intended to prevent.  I am extremely disappointed that the Council approved this charter amendment despite the opposition by the citizen’s commission and the minority community,” stated Senator Sylvia Garcia.

With the Supreme Court decision in Shelby County v. Holder, the City of Pasadena will no longer need to obtain the pre-clearance of the Department of Justice, despite the fact that a similar election change was denied approval in December of 2012.  The measure will likely be added to the November ballot for voter approval.

According to U.S. Department of Justice, since 1982 Texas has had the second highest number of Voting Rights Act Section 5 objections including at least 109 objections since 1982, 12 of which were for statewide voting changes.  Texas leads the nation in several categories of voting discrimination, including recent Section 5 violations and Section 2 challenges.

According to this article, the charter amendment would be a fifth one added to a list to be voted on in November. The people still get to decide, but it will take a real, concerted effort to educate voters on defeating this amendment.

What I have been saying for the longest time is that while the Voting Rights Act was created to protect voters from people like Pasadena’s mayor, we still have the ultimate responsibility to vote. In the case of Pasadena, elections matter even more.

BOR has more, including some demographic analysis.

Posted on April 29, 2013 | Comments Off on Early Voting Begins for Pasadena Elections

Today marked the start of early voting for May elections. Although there aren’t any within the Houston city limits, there is the  first post-redistricting City Council election in Pasadena.

The long-time Mayor, Johnny Isbell, has an opponent by the name of Gilbert Pena, a retired refrigeration businessman.

Pena said for too long the city has neglected infrastructure in the northern part of the city where he lives, has wasted public money and more recently, deprived residents of a public transit option.

“The problem is only going to get worse,” he said of the infrastructure. “Then all of Pasadena is going to have to pay for it.”

Pena, 63, said it is unfair that the city spends millions of dollars on the upkeep of the golf course but was unwilling to spend far less to continue the contract for a public transit service, even though ridership was increasing.

In District A, incumbent Ornaldo Ybarra has an opponent. Ybarra has been the lone Hispanic on the Council and the most vocal during the redistricting process. Recently, he was a candidate for State Rep. District 144; however, came up short. Ybarra is an honorably discharged US Marine,  a UH grad, and a Pearland police officer. I’ve known Ornaldo and he has served his community well and deserves re-election.

In District B, Richard Serna is running against two opponents for the open seat. I met Richard recently and he’s an upstanding guy committed to his community. Serna had vied for the seat when Council filled the vacancy.

In District E, Cody Ray Wheeler is vying for the open seat. Wheeler is another UH grad, former US Marine, and comes from humble roots.

Comments Off on Early Voting Begins for Pasadena Elections