The Trump Thing and Latino Voting

Posted on June 30, 2015 | Comments Off on The Trump Thing and Latino Voting

Fact:  Trump is a pendejo. Fact:  All the pageant and show cancellations are not going to hurt Trump’s wallet. So, what else are all the hurt Latinos going to do after the Trump anger fades away?

What was noticeable in all of this was Latinos declaring that they would not be voting for Trump in 2016. Of course, I asked myself if they meant in the Republican Primary or in November 2016? Given that not many Latinos vote in the GOP primary, I’m guessing they meant November, in which Trump was likely not going to be candidate, anyway. So, those declarations didn’t excite me much, but if it means more Latinos are going to show up or get involved, great!

But let’s look beyond the idiotic comments and pay attention to issues, like health care, education, jobs, economy, and yes, immigration. Who has real solutions, or which candidates can we as voters drive toward real solutions, rather than just the usual campaign talk? Thanks to Trump, folks are paying attention, so, campaigns need to talk issues rather than just point fingers at Trump and Republicans.

In the quest for higher turnout, Latinos won’t respond favorably to blame, though.

Here in Texas, no sooner did Leticia Van de Putte lose in her bid for Mayor of San Antonio, I started seeing rants from liberals and Dems blaming Latinos for the loss. It was a bit annoying, considering it was coming from folks who are part of the problem and who refuse to look inward for solutions.

My friend Joaquin Guerra from TOP penned an excellent op-ed. Here’s a bit of it:

If we’re not part of the plan to win or part of the engagement strategy, then, no, we’re not to blame for the fact that you came home and dinner wasn’t waiting for you on the table.

Stop taking us for granted.

Here are five tips for politicians, pundits, reporters, editorial boards and political consultants who are scratching their heads about what happened:

Read the whole thing and not just the tips I took out of the article.

The bottom line is that Latino hires and token words by campaigns aren’t enough to excite Latino voters. And avoiding questions surely doesn’t help. And, it certainly doesn’t help when Latinos are used by supposedly liberal candidates as a piñata to gain a few right-wing votes, either.

Obviously,Trump’s Mexican attack was an attempt to gain votes in the GOP primary, and we’ll hear it from other Republicans, too. But, Dems do it as part of a continually losing strategy, too, if they get desperate enough. It needs to stop and Trump is just the tip of the iceberg.

Comments Off on The Trump Thing and Latino Voting

Twit of the Day: Dan Patrick

Posted on September 9, 2014 | Comments Off on Twit of the Day: Dan Patrick 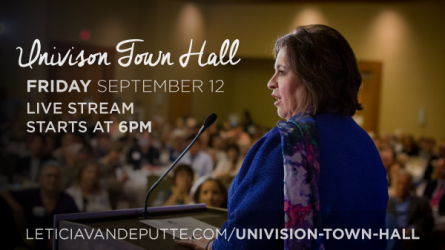 Comments Off on Twit of the Day: Dan Patrick