Tag Archives: show me your papers

Posted on March 31, 2015 | Comments Off on AL5s Douglas First Council Candidate to Stand Against SB185 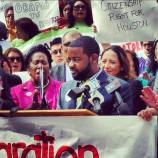 We all know that SB185 has been getting its debate in Austin with some delays. The question of the matter is whether we want state and local law enforcement agencies to practice legalized racial profiling, which is basically what SB185 does. While some law enforcement leaders have stepped up against the bill, including Sheriff Adrian Garcia, I can’t say there have been many municipal elected officials or candidates for municipal office stepping up. So, to find that Durrel Douglas, candidate for AL5 has made his voice heard by asking Houston City Council to get involved in the issue was refreshing.

While Public Safety accounts for $1.3 Billion of our city’s FY-2015 $4.7 Billion budget, those resources should be used for police training, recruitment and community policing initiatives that build bridges, not break them down.

While some in the state legislature want to increase the burden and responsibility of over-exerted police departments, over the last five years, HPD has solved just 8 percent of burglaries, and the clearance rate has gotten worse, dropping lower every year since 2010 according to ABC-13 (KTRK).  Although SB 185 is to be voted on under the pink dome of our state capitol, our Houston Mayor and City Council members should use their influence to discourage passage of this horrible legislation.

Austin City Councilman Greg Casar, a community organizer, is heading in the right direction as he uses the megaphone entrusted to him by his constituents.

Obviously, this legislation would open the door for racial profiling since people like me wouldn’t be asked to show my papers.  Which race of people would be most likely to be “asked for their papers?”  Racial profiling of any kind is wrong.

Elected officials, conservatives, in particular, enjoy using border and immigration issues for their political purposes. I recall then-District E Councilman Mike Sullivan and then-CM Anne Clutterbuck went on an anti-immigrant tirade in support of 287(g) six years ago. With SB185 being debated, it seems both sides of the issue have been quiet at the horseshoe, but this law would greatly affect City coffers, police services, and community trust of he police. Where’s the outrage against the Lege by our local leaders?

Thanks to Mr. Douglas for bringing it up while it is still being debated.