Posted on November 29, 2017 | Comments Off on Early Voting for Houston ISD and HCC Begins Today

That’s right, some of y’all need to vote, again.

First of all, I misblogged the other day when I stated Alief ISD would have a run-off. In reality, the candidate with the most votes wins. So, DC-endorsed Natasha Butler, who won by 11 votes, joins Breaux, Nguyen, and Key on the board. Congrats to all of them. Serve the kids and the rest of us well.

Meanwhile, as many as 78,000+ voters will have the opportunity to elect a new 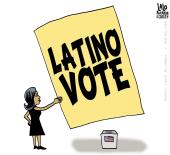 HISD Trustee in District I. Voters will choose between Elizabeth Santos, who earned 45% of the vote in Round 1, and Gretchen Himsl. Another 55,000+ voters in District III will get to pick between Jesse A. Rodriguez and Sergio Lira. Almost 10,000 and over 3500 voted in District I and III, in Round 1, respectively.

As far as nods are concerned, I’ll say most of my friends are supporting Elizabeth Santos in District I, and my friends seem split in District III, but I’ve been rooting for Jesse A. Rodriguez.

In HCCS District IX, Preta VanDible Stalworth is the progressive candidate in the mix. And that’s all I’ll say about that. District IX is in Southern Harris County and stretches from around the Southwest Freeway to beyond 288 to zip code 77048. Around 100,000 voters get to choose in this one, though a little over 10K voted in Round 1.

With just a fraction of local voters eligible to vote in these races, you might ask yourself:  Can I vote in this one? Check and see if you have a ballot here. Then find your early voting location here.

So, get out and vote. It really does count in these low turnout elections.

UPDATE:  The Chron reports that both offers for the property have been rejected. Supt’d Grier states he will put the property back on the market.

One of Houston ISD’s best schools is the High School for Law Enforcement and Criminal Justice. I mean, if it produced someone like my friend, HISD Trustee and Attorney Juliet Stipeche, then it must be a great incubator for our city’s future leaders. But the status that it has earned is now threatened by a land sale deal that could leave Houston ISD and the students of HSLECJ shortchanged.

Houston ISD wants to sell the land for a nice price and in turn use that cash to buy more land and build a new HSLECJ. The problem is that while the new school is being constructed, Houston ISD would pay rent to the new owners at a hefty price. Under one deal, HISD would pay a whopping $100,000 per month, and under another one, $250,000 per month. That would end up eating millions of dollars that could be used toward the new school building.

On top of all of this, Houston ISD is yet to find a suitable piece of land to replace the current school that is beneficial to students  and all stakeholders. And, moreover, HSLECJ is a school that is 70% Latinos and they deserve a better deal than a high-rent building that cuts into the quality and value of their new school. Bottom line, it’s not a good deal and the Houston ISD Board of Trustees should not rush into the deal. In other words, I agree with the Editorial in the Houston Chronicle, a copy of which I provide below. Give it a read. Then contact your Houston ISD Trustees and tell them to stop the sale of HSLECJ.

View this document on Scribd