Posted on July 3, 2019 | Comments Off on Julian Castro Continues To Impress in Houston 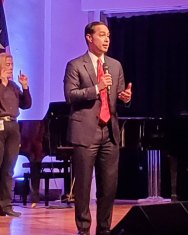 First of all, thanks to the Harris County Democratic Party for inviting presidential candidates to Houston so that Democratic voters can get a closer look at them. In the case of Julian Castro, he impressed from arrival to exit.

Entering a packed St. John’s Downtown to Selena’s Baila Esta Cumbia, Castro showed that his campaign is indeed connecting with voters and much of the interest is owed to his debate performance. No, not because he schooled some of his opponents on immigration reform, but because his delivery on a variety of issues was strong and to the point. Castro has brought the issues of policing, housing, and education to the forefront, and he expects to release a plan on climate change soon. And we must keep listening.

Check out the video!

Yet, I would venture to say that if it were not for Castro’s bold immigration reform plan, the campaigns would not be responding to the issue as strongly as they have been. While the current wave of anger toward the Trump administration is because of children in cages, awful prison conditions, and a racist, inhumane Border Patrol, Castro has pointed to a broken system beyond asylum seekers and the easier platform point of DREAMers. Getting to the root cause as to why people are coming to the US is something that hadn’t been spoken of since Bill Richardson ran for President in 2008; in Castro’s case, a proposal for a Marshall Plan to bolster those countries whose citizens are suffering through bad economies, bad right-wing regimes, and government- and gang-led violence.

I hope that we will hear more about Latin America policy from the candidates. Let’s face it, much of the cause of Latin America’s issues is US intervention in democratic elections, including a coup in Honduras during the Obama administration because they didn’t like the progressive-minded guy who won. We’re talking hard truths that Democrats must swallow if they really want to move toward fixing a problem, rather than putting a band-aid on it and ignoring it for two terms.

Check out the video!

This said, I’m glad Julian Castro is on the debate stage. He’s brought a Mexican American point of view to American politics that has gone ignored for too long. Castro offers his rich political and family history that America has neglected to embrace and he just happens to show off his abilities to talk domestic and foreign policy in a manner that doesn’t sound like “inside baseball.” So, let’s all of us keep listening. We may just learn something.