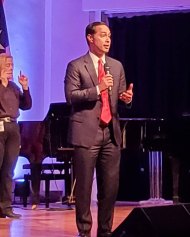 If anything has become obvious after two days of Democratic debate, it’s that most of the white dudes want to keep criminalization of border crossings and the candidates of color and women want to do away with it. And the pro-criminalization side has its king in Joe Biden.

Biden’s “back of the line,” “all border crossers are criminals” tirade set him apart from the rest of the crowd. He’s basically the Democrats’ Trump, saying what probably 1/3 of the Democratic Party think or is OK with a candidate saying because they just want to get rid of Trump and think anti-immigrant BS is the key to victory. Pro-Tip:  It’s not!

I can’t say I hate myself or a group of people enough to vote for this kind of Democrat.  Maybe that would change at the voting machine in November 2020, but I’ve been worn thin and will speak freely today. And Democrats refuse to learn from our past, even getting upset when some of us criticize previous Dem administrations. Nothing should be off-limits when we are picking the next leader of this country because we should strive for the best.

Performance-wise, I think Julian Castro did quite well, considering CNN only gave him less than 11 minutes to speak, while Back of the Line Biden got twice as much–most of it debating Kamala Harris.  But Julian proved that we Chicanos can do a lot with a little. Whether it was taking on Biden’s fear-based and gutless immigration pronouncements with a truly comprehensive plan or detailing his thoughts on a health care for all compromise, Julian was focused and coherent.

And while some will whine about Joe Biden being the target of some of the others, I think that’s a good thing. It showed us what he’d sound like in a debate with Trump, and if it didn’t scare you, then you are up in the clouds thinking he can beat Trump.

Cory Booker faired well against Biden after Biden’s attack on the town in which he was Mayor. (Why are white dudes attacking black cities and their leaders lately?) There are a few reasons Booker isn’t my favorite, but he’s quite the debater. Kamala Harris did well, too, on health care, despite attacks from the right in which scary numbers and confusion were thrown around by the mods.  Gabbard, of course, pointed out Harris’ flaws as attorney general of California, but it didn’t earn her points as much as it may have smudged Harris. Gillibrand has made a turnaround on immigration and sounded much more coherent on the issue and other issues than usual. Even DiBlasio and Yang weren’t awful.

Democrats have a decision:  Pick the right person that can take on Trump or settle for mediocrity.

I get lectured by former republicans and Dems who give money and support to “tolerable” republicans that we need to beat Trump with any sack of potatoes with a (D) by their name, but it’s early enough that we can thin the herd of basically bad people in our Party. For all the flaws that are pointed out, I think Castro, Warren, Sanders, and Harris are great candidates. Booker is OK, too.  But this round of debates proved that the mod(erate) squad, led by Biden, do nothing to increase participation of those constantly left behind in the conversation with their “no se puede” attitudes. If they don’t fire up an avid voter such as myself, then they won’t fire up the others we need. So, it’s not a bad thing, 6 months ahead of the first primary/caucus, to have some real conversations about the candidates–even picking them apart to see what they’re made of.