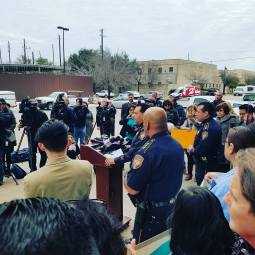 Gonzalez reiterated his support of immigrant rights and his promise to rid Harris County of the controversial program. He did, however, ask for patience and time to study and navigate its ending because of its ties to federal and state funding, and because he wants to ensure that such a program targets violent and serious criminals. During the press conference, he also reiterated that the program is run within the jail and not out in the field and that his deputies will not be targeting individual suspects because of immigration status.

Local immigrant rights activists are seeking policy changes and strong statements of support to undo programs that target immigrants and have run amok of their stated intents. Programs which basically federalize local law enforcement are flawed and have been a cause for racial profiling, wasted resources, family separation, and downgraded local economies.

“I know there are a lot of families and children who are afraid and worried right now about what might happen to them. I want them to know that Houston is, and always has been, a welcoming city, where we value and appreciate diversity. HPD is not the Immigration and Naturalization Service. We don’t profile, and we are not going to start profiling people to determine whether they are here illegally. It hasn’t happened under previous mayors, and it will not happen under my administration.”

Still, at the end of the day, it is policy changes that are sought. And political promises that are expected to be met. And in the era of Trump and his rampant executive orders, leaders feel the need to navigate carefully or else funding may be lost. With the State of Texas attacking elected officials and about to begin consideration of a racial profiling legalization bill in Austin (SB4), it seems some fear taking on the Governor and his bigoted threats.

Stay strong, elected officials. People are counting on you!