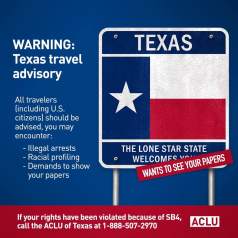 Immigrant rights group, FIEL, held a press conference this morning to remind Mayor Sylvester Turner that the end of the legislative session has come and that it is time for Houston to join other cities in filing a lawsuit against Greg Abbott and the State of Texas over its new racial profiling law, SB4. Turner has stated he would begin to look at SB4 after the legislative session.

KPRC reported on today’s action. FIEL has provided video of the press conference.

“Our community and many of its leaders have been very patient and have continued to have trust in Mayor Turner. We are less than 100 days from SB4 being implemented. We do not need more promises of a welcoming Houston. We need the mayor and City Council to take action to protect Houston immigrant families,” said Cesar Espinosa, executive director of FIEL.

Mayor Turner has since responded with a press statement.

Now that the Legislative session is over, the city is in the process of reviewing and analyzing all bills that passed the House and Senate, including Senate Bill 4. The city, of course, will adhere to all laws that are deemed constitutional and consistent with the rulings of the Supreme Court.  SB4 does not take effect until September 1, 2017. In the meantime, the city of Houston will do its analysis.

On Wednesday, May 31, the City Council will hold a public session and SB4 opponents are expected to appear to ask the Mayor and City Council for legal action against the State of Texas.

The last-day-of-session antics of Republican State Rep. Matt Rinaldi (Irving) in which he stated he had called ICE on Texas Latinos who were protesting SB4 at the State Capitol prove the intent of bigoted racial profiling laws created by Republicans. These laws do nothing for public safety; if anything, they have a negative effect on safety and the economy. But everyone involved already knows this. Let’s call it what it is–state-supported racism.

City leaders have a duty to protect its residents from these kind of laws, and the only recourse left (other than the 2018 and 2019 elections) is the courts. Frankly, if the City of Houston can pay for lobbyists to push for pension reform, then it can pay for lawyers to ensure its residents are protected from SB4.

Or, maybe the Mayor is just waiting for the governor’s signature on pension reform. And for the ink to dry.