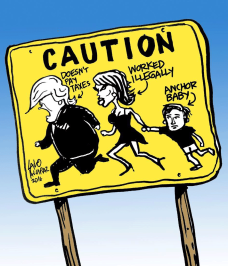 The Trump campaign-turned-administration has perfected the way it instills fear in communities. Of course, the fear has created plenty of activists who will hopefully remain committed to a multitude of issues utilized by Trump to gain enough votes in a few states to win the electoral vote.  Monday was a stressful day for DACA beneficiaries–numbering about 750,000 nationally. By mid-afternoon, it seemed Trump left Obama’s executive order which created the Deferred Action for Childhood Arrivals alone.

Even his COS Priebus and his alternative mouthpiece Spicer seemed to try to calm pro-migrant forces a bit by stating that the priority is “criminal” immigrants. Cesar Espinosa, ED of FIEL, a local immigrant rights group, asked, “What is ‘criminal?'”

The Obama administration used the same kind of program to deport 3 million and warehouse thousands more in private prisons. Early on, the majority of deportees were convicted of low-grade, non-deportable crimes, but were still sent to home countries, breaking up families, and affecting local economies. Now, with 750,000 DACA lives hanging in the balance, hundreds of thousands more of their parents, and millions more who are simply working and contributing to their communities waiting for Trump’s next move, there’s more fear and stress in the community.

The lack of action by Trump today didn’t provide much comfort. Activists, though, are looking to leadership at the local level.

The newly elected Sheriff of Travis County, Sally Hernandez announced her department would not cooperate with the Trump administration and has earned the ire of Greg Abbott who has gotten really good at making threats about funding. El Paso’s Democratic Sheriff, on the other hand, has decided to cooperate with Trump because he fears losing grant money.

Locally, activists await action from new Sheriff Ed Gonzalez. Gonzalez promised to rid the department of 287g, an immigrant removal program which provides grant money to the department. Since taking office, he hasn’t mentioned anything about that promise, and already there is the start of a movement requesting action from him and Mayor Sylvester Turner.

It’s only Day 5 and real issues are now being discussed. And we also have the Texas Lege to deal with who are bringing out multiple cans of crazy. Let’s stay focused.

One response to “Trump Leaves DACA Alone For Now”