Posted on July 19, 2017 | Comments Off on Harris County Attorney Files Brief Against SB4 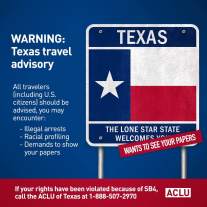 As was reported last week, the Republicans on the Harris County Commissioner’s Court may have chickened out of joining the SB4 lawsuit, in what may have been a pre-emptive move to avoid getting on Greg Abbott’s “list,” but it didn’t stop County Attorney Vince Ryan from submitting a brief to the federal court asking for a stop to any implementation of the racial profiling, anti-immigrant law.

The Harris County Attorney’s office, objects to the law for the following reasons:

The office represents the state Department of Family Protective Services in child protection cases, advocating for children’s best interests and the preservation of families — irreconcilable with the thrust of SB4, which is to “to cooperate in efforts which will lead tothe deportation of parents or kinship caregivers, the separation of families, and further trauma to children,” according to the brief.

Federal mandates require that assistance and benefits should be available to children and families “irrespective of their immigration status,” according to the brief. State law also directs that “the provision of the services necessary to give effect to children’s best interests are not conditioned on their, or their parents’, immigration status,” according to the brief.

Ryan states: “Any county attorney who declines to engage with assisting in the enforcement of immigration laws or discourages colleagues from doing so in order to advocate for the best interest of the child and promote family unification — as child welfare laws mandate — would not be “providing enforcement assistance” and would be “adopt[ing], enforce[ing], or endors[ing] a policy” or engaging in a “pattern or practice” that “materially limits the enforcement of immigration laws.””

Children of parents or family members who have been deported will be placed in an overburdened and potentially harmful foster care system.

Immigrant communities will fear cooperation and will not report abuse or neglect or provide information to authorities seeking to protect children.

SB4 will leave a huge swath of the community affected in one way or another. Whether one sees it as a legalized racial profiling law that targets anyone of color to be asked their immigration status, or a license for local cops to shirk their crime-fighting duties in favor doing some immigrant hunting, or in the case of the County Attorney, a law that will affect children caught up in their own brand of hell, it’s just a bad law.

“S.B. 4 will do irreparable damage to this State’s child welfare process, place county attorneys charged with representing DFPS in an irreconcilable conflict, and do further trauma to children who have been placed in the State’s care. Further, there is no legitimate state purpose in treating children who have an unauthorized immigrant parent or other potential care giver differently in child welfare cases,” states Ryan’s brief, which was filed this month in federal court.

In other news, the City of Laredo has joined the SB4 lawsuit. In fact, their City Council voted unanimously to join it. Now, that’s what I call a “welcoming city.”