Mayor Turner, Other Local Electeds Come Out Against ICE Raids

I was happy to see Houston Mayor Sylvester Turner’s appearance on NPR to come out against the coming Trump/ICE immigration raids.

Well, let me just say that we have repeatedly said that Houston Police Department is not ICE. We are not going to be participating with ICE on these type of raids,” said the Mayor. 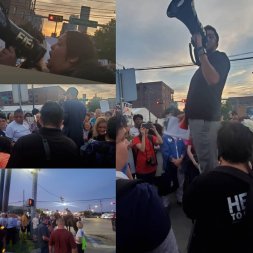 The raids and the rhetoric have instilled fear in the immigrant and Latino community. Hell, I’m a citizen multiple generations in and I sure as hell don’t get the warm and fuzzies that should be my birthright during times like these. In fact, Trump’s recent executive order regarding gathering citizenship information from agencies sent a chill down my spine, moreso than the census citizenship question about which he has been so adamant.

First of all, it is obvious that ICE doesn’t have a good database of people. And if Trump needs to get that information through piecemeal techniques from other agencies, it tells me that even citizens are at risk during immigration raids–or, at least the burden of proof is on any brown citizen that is targeted or detained. So, yeah, the raids instill fear beyond the immigrant community, too. Ultimately, the US Census is what should help us create a better democracy based on the number of people living here. It should not be a tool for immigration raids. Just something to think about. And as my lawyer-sister keeps reminding me, “Get your passport, ASAP!”

I was glad to see candidates running in 2019 City of Houston races also come out against the raids, including Raj Salhotra for At-Large 1, Janaeya Carmouche for At-Large 3, and Ashton Woods for At-Large 5, and Isabel Longoria for District H, while also distributing pertinent information on the rights of immigrants.

The public response to the raids, baby jails, inhumane conditions at concentration camps, and the reality of a racist and gestapo-like Border Patrol continues to grow. Hundreds showed to a protest at the 419 Emancipation baby jail on Friday, 7/12. I know of a large group heading to Carrizo Springs, TX to protest a new baby jail (a former oilfield camp under the Texas sun) that just opened. And there are actions across the state and country.

This entry was posted in 2019, Accion, City of Houston, Sensible Immigration Reform. Bookmark the permalink.

One response to “Mayor Turner, Other Local Electeds Come Out Against ICE Raids”