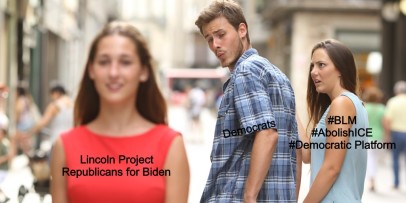 I think the only part of the Democratic National Convention (Day 1) in which I got teary-eyed was during the singing of the National Anthem and “America,” because I was hoping beyond hope that these tunes would actually mean something, again, in the future. Otherwise…

This first day seemed to be all about appeasing the middle, the right, and the white. That tried and true strategy that never works. Devoting 5 or so minutes to Republicans for Biden who basically stated that Joe Biden was not the big bad leftist portrayed by Trump didn’t leave me feeling warm and fuzzy. If anything, it makes me think that they’ll be quite comfy with the status quo that still enriched them during Dem administrations. The fact that Dems think that this is a workable strategy to gain white Republican votes still leaves me dumbfounded.

The use of Meg Whitman reminded me of her 2010 run for CA guv when she was considered the “cool republican” who suddenly turned on immigrants to the point where she supported the deportation of her undocumented housekeeper if republinuts gave her the nomination. All I saw was a reminder of bigotry and hypocrisy; but, that’s the kind of thing I look for in these kind of events. Let’s face it, after all of these years of immigrants being used as a political piñata by republicans, the Dems using them for votes leaves me disappointed. But, Dems refuse to learn.

Even more embarrassing was the use of Art Acevedo, the HPD head cop, in a racial justice discussion. He still hasn’t answered for HPDs killing of Nicolas Chavez, he refused to release bodycam footage of the killing, yet, the Democrats seem to think he’s part of the “racial justice” solution. What’s his answer? Crocodile tears and high-fiving protesters before gassing them and wrongly arresting them? I’m not the only one who was perturbed by this. Hell, Julian Castro has been doing some great work regarding police reform; why wasn’t he in this discussion?

Senator Catherine Cortez Masto and Senator Bernie Sanders were exceptional in pointing out the Biden agenda (which is what we all need to hear), especially Bernie. Bernie even did a better job on the issue of immigration and hate in his few minutes of speaking. And I’ll be the first to agree that a guy that looks like Bernie Sanders (old and white) should be stating these positions and not just brown folk. I hope Biden states them so eloquently.

Michelle Obama gave a great speech, as always, but I know I wouldn’t be able to say that being President reveals who you really are knowing my spouse deported 3 million immigrants and warehoused hundreds of thousands more (kids included). Of course, when it comes to remembering the “good ol’ days” of the Obama administration, I’m pretty much dead inside. Still, good speech.

Anyway, we’re all trying our damnest to be good soldiers despite the things that piss us off about those in charge of the Democratic Party. As Bernie reminded us, some of the issues we have fought for are now part of mainstream messaging (if not thinking) in the Party. It’s our job to keep those we elect accountable is what we’re told about democracy. Therefore, expecting better candidates does not end when the ticket is decided, either.